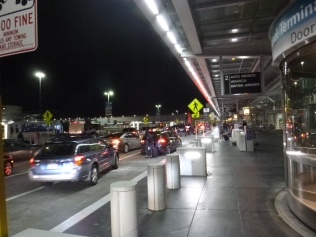 SFO International Terminal on a Thursday night. Who knew?!

Our flights to Colombia – there didn’t seem to be any direct way to get there from SF – but the first leg left SFO early Friday morning, early enough that we actually went on Thursday evening. I was surprised at the amount of traffic at the International terminal, and the line for security, although I tried to distract myself from the charade by people watching, and did see, amongst all the neck pillows, a good t-shirt – “I don’t snore, I dream I’m a motorcycle.” Perhaps my attitude registered on something, as I was selected for a pat down after going through the scanner. Hmnpft. Anyhoo, they did not find anything, and we were able to find our gate, and get a drink before the bar closed. Whew.

Ah yes, the hurry up and wait. And oh yeah, we’re on the Colombian airline – the announcements were en Español. The plane was an Airbus A320 – I’m not sure if it was the plane, the airline, or maybe that I hadn’t flown in a while, but somehow the economy felt more generous than on US airlines. For a moment I thought we’d have our row of 3 seats to ourselves, but no, the plane filled.

There were individual screens for each seat – I know that’s not a new thing, but I suppose still more of my air travel has been without them than with them so it still sorta surprises me. There were also USB ports, and wing flaps on the headrests. Yes, I’m easily impressed.

The pilot said it would be 5 hours and 10 minutes flight time to San Salvador, our transfer point. In addition to the travel time, local time was an hour ahead of San Francisco. I managed to doze off, although it was fitful – I’m not sure if there were any services, since it was “you really ought to be asleep” time. 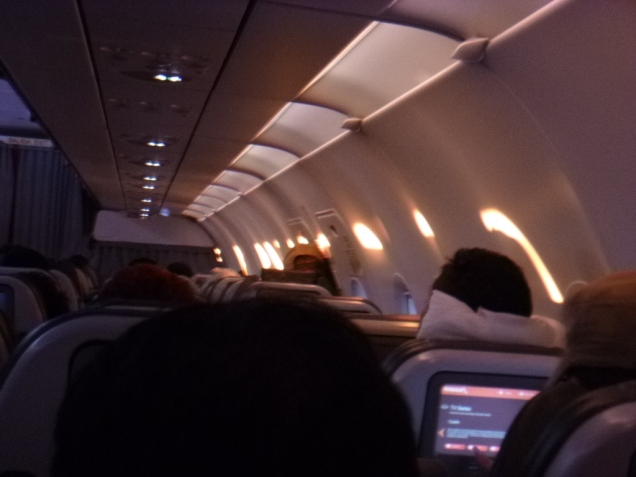 When I “woke” there were red sunrise crescents on the wall from a few shades that had been left open, and the time said 4:45 in San Francisco. The flight map said we still had an hour and forty-five minutes to go. I felt a bit peckish, and was wondering if there would be a meal service, when the flight attendants went around first with warm moist towelettes, and then with breffast! The choices were a ham and cheese burrito, or an egg empanada – which I heard as egg and banana, which sounded odd, so I didn’t choose it.

We had a short connection time – fortunately our first flight was on time and the gate for the second flight was not far away, but I was surprised that we had to go through another check station, where they looked at our passports and ran our bags through a scanner. The flight was already boarding when we got to the gate – actually it was a get on the bus to the plane deal. It was pretty nice not having to sit around and wait, and it all went so quickly I didn’t have time to get worried about missing the second flight. 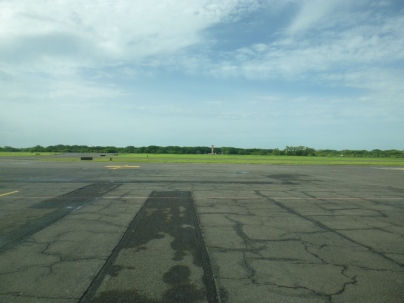 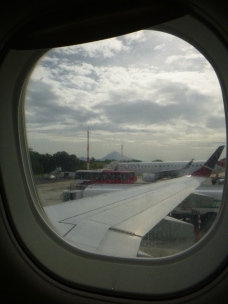 The little bit I saw of El Salvador was pretty much flat, although there was a sort of volcano-y looking thing in the distance from the airport. We did see a bit of coastline, although I think for the majority of both flights we were over land.

From El Salvador it was another 3ish hours flight time, plus another hour ahead on the clock. We deplaned onto the tarmac, and had what seemed like a long bus ride to the terminal. There seemed to be inordinate numbers of airport workers – at each gate, for luggage handling, for who knows what all. Maybe that’s what it takes to run an airport, and I just don’t usually see it all when going directly on or off the plane by jetway. 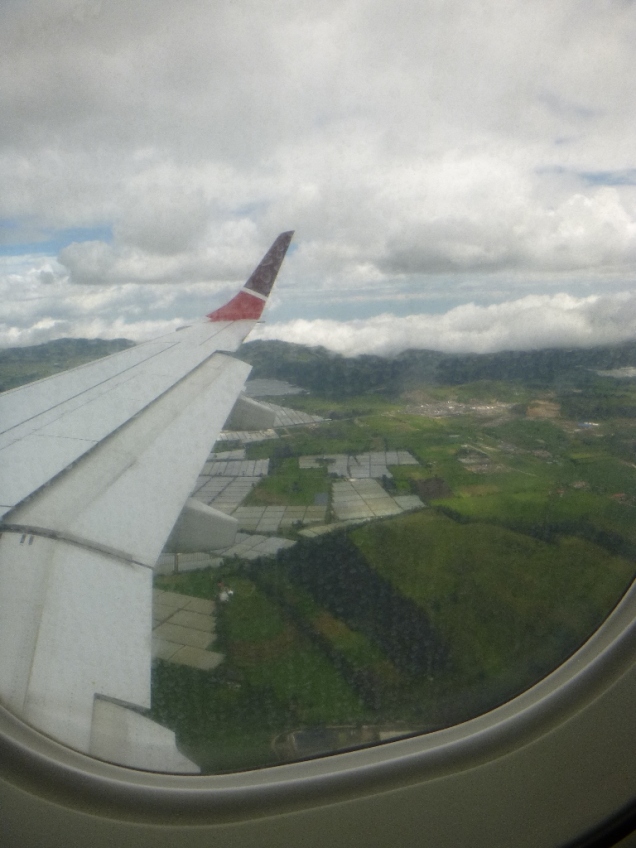 Immigration had nicely color coded footprints to follow depending on what category you were in. We were green for foreigners. Once we had our passports stamped we continued on to pick up the one bag we’d checked, and then got some local money. I suppose because of money laundering, the exchange was quite the process – they needed an ID, all the info and a fingerprint! The bills were pretty and colorful, like most countries so much more interesting than the US currency. One dollar was 2900 something pesos so SO. MANY. ZEROES.

On the flight from El Salvador we’d gotten a customs form, but it had been in Spanish. We’d taken a stab at answering it – and done OK – but it turned out there were English versions at the customs check point, so we filled those out. I don’t know if the man even looked at mine. The bags went through another scan and then we were free to go.

We’d been warned that the temperature was similar to San Francisco, so there was no great temperature shock when we went out onto the sidewalk, but there was a bit if the being in another country thing. It was not totally crazy but most everyone was speaking not English and there were a couple of ways we could have ended up in a not official taxi, which we’d been cautioned against.

As a big city, Bogotá was same same but different. High rises, traffic, etc. but in general smaller cars, a separated bus way, and in some places separated bike way. Lots of murals and urban wall art – some official looking, some not so much. A man at a stoplight with a squeegee and bottle of soapy water offering to wash windshields, lots of motorcycles and scooters. Fortunately the taxi driver was not too chatty – I’m not a huge fan of that even in my first language.

Eric had a map up so could tell we were, indeed headed to our hotel, which was fairly straightforward to get to, although I don’t think I’d want to drive in Bogotá. We checked in and headed up to our room on the eighth floor. 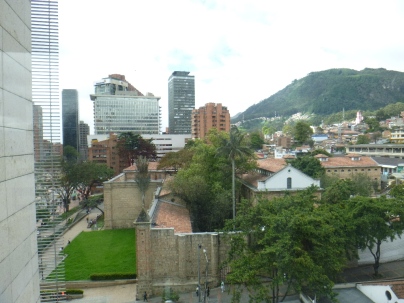 The room was spare and efficient, with an angled bathroom next to the door and a built-in shelving/open closet and desk under the window. The receptacles were configured for a variety of plug shapes, and there were USB plugs! A sign listing the Hotel Services included there being an Ironing room, which was intriguing but I did not investigate.

Some combination of slight dehydration, lack of coffee for the day and oh yeah maybe that 8000+ feet of altitude had a headache threatening, so I ignored the voice saying, “you’re in a new place, go outside and look around!” and took some headache medicine with a bunch of water and laid down for a nap. We talked about setting an alarm, but there was a mixup between home time and local time, and I ended up sleeping a bit later than “planned.”

In fact it was dark out when I woke up, which made it seem quite late, but, sunset being around 6 PM, it wasn’t really. There was dance music going somewhere, and when I looked out the window one of the neighboring buildings had scrolling light displays on it.

We went downstairs. I had thought there was a restaurant restaurant, but all we saw was the lobby bar area, which did seem to have a food menu, but also had music playing. Not crazy loud, but more than we were interested in.

There was a light drizzle falling when we went outside. There were several restaurants close by the hotel. We looked at a menu, recognized a few words but nothing jumped out as must have. We walked a short way down the street we had come in on from the airport, saw a McDonald’s but not much else, restaurant-wise – well if McDonald’s can be called a restaurant. We did pass some sidewalk vendors – the arepas smelled tasty – but had been advised against eating street food.

We ended up back by the hotel. Most of the restaurants were still nearly empty. Oh – people must eat later here. After scanning a couple other menus and deciding it was way more thinking than we wanted to do at the moment we ended up at Home – a burger place with a simple menu. Note to self: tocineta means bacon. They came in clever corner pocket wrappers, and were not overcooked. The menu said medio, but it was a nice medium rare.

After joking about going out clubbing we headed up to the room. The hotel had WiFi, so I checked in on the internets. A friend had posted an Anthony Bourdain quote that seemed rather apropos.

“If I’m an advocate for anything, it’s to move. As far as you can, as much as you can. Across the ocean, or simply across the river. The extent to which you can walk in someone else’s shoes or at least eat their food, it’s a plus for everybody. Open your mind, get up off the couch, move.”

And the next post – from another who I’m pretty sure doesn’t know the first, although you never know in Santa Rosa – was the exact same quote. Huh. What are the odds of that?! Sprinkled in my feed were other quotes, a video, and one that just said, “Anthony Bourdain” – oh, that can’t be good. The googles confirmed.

A sad benediction for the trip, which was a gathering of friends and family – many for the first time in Colombia – to celebrate the wedding of two amazing people. It was a good reminder of how much there is in life, and how unfortunately it is not always enough.