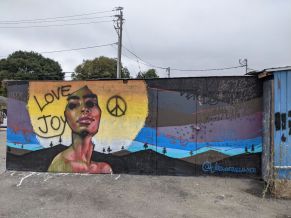 I’ve definitely gotten in the rut(?) of not wanting to drive … corrupted by the bike and train … and Eric was in town for a quick visit, driving down on Friday and back on Sunday, so I figured he didn’t want to get in the car either. Then the AQI was slightly in the yellow, which I know isn’t horrible (although DOH, somehow I didn’t account for getting smoked out while trying to get this done – yeah probably should have done more earlier in the year, but as Uncle Tony says, “you can’t put s**t back in a donkey”) but I wasn’t feeling like doing anything super long or with a high level of exertion. 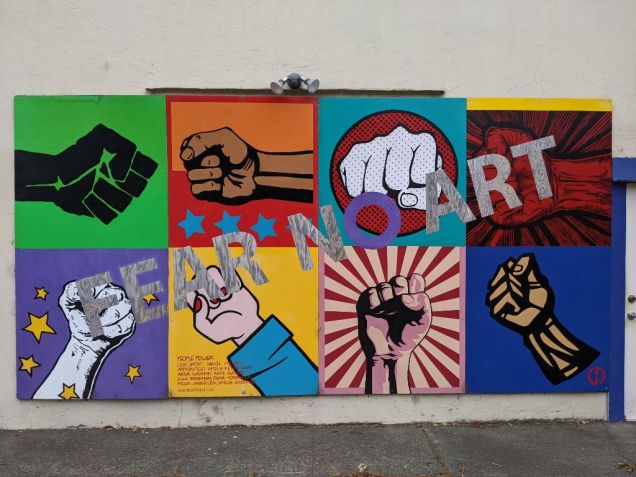 Eric suggested walking to a coffee shop (ABC!) but then I decided we needed a theme or something, so I made it a mural meander. Many of them I had seen before, but in passing on my bike or in the car, so it was nice to be on foot and spend more time looking. And at one spot, we found that the back side of the building also had a mural that I had not known was there and had never seen before!

The first ones were on Santa Rosa avenue, and some had sadly been graffitied on. We then wandered through the SOFA district, and over to our bakery stop – Tia Maria Panaderia! Where somehow (busy eating?) I did not get any pictures of our concha breakfast sandwiches, Abuelita mochas and mixed berry (blackberry, blueberry, red (er, rasp) berry) tart! So tasty!!!

go around the back of this building!

On the way back I noticed one of the ones under Highway 12 is apparently from 1981! Forty years!!! Then some of the others have gone up within the past year. Wonder what the next forty years will bring…