Since I was up in the woods with Eric for the weekend, I roped him into the hike thing. After some discussion about what makes a hike a hike he came up with a route around the neighborhood that was fiveish miles, and traversed some tracks he had explored and wanted to show me, as well as some that would be new to both of us.

Although he’d had snow, a stretch of unseasonable warmth had melted it all into mud. The day before we’d driven down the hill for a bike ride in drier conditions. The warmth had continued, so things were less muddy, and being on foot made it easier to avoid the spots that were still wet.

We headed out his road, crossed Graniteville Road, and onto a track to the spring that he’d explored on the bike, but was new to me. It was one of those was probably a logging road at some point, but is getting grown over. A vehicle would still fit down most of it if you didn’t mind scraping through tree branches, but it didn’t look like anyone has done so recently. There were a few small patches of snow here and there.

From the spring we took another logging road that had been recently cut or improved – the first section was finished with gravel! We continued on to part that neither of us had been on before. Maybe because we were going downhill, or that there only seemed to be the one way to go, we somehow missed what had been a turn on Eric’s planned route, and found ourselves at a dead end. Or at least at the end of the obvious road.

Eric could tell if we continued to follow the creek and “just went thataway” we would come out at a known road and be able to get back on our route and get home. So we decided to try it out. Which required some bushwhacking. *OK, this is DEFINITELY a hike now! It was one of those things like riding on doubletrack, where the one you are not in always looks smoother/easier, but then you change course, and no… it’s really not. Oh! that sorta looks like a trail… ah, not so much… but it really wasn’t too far, and soon we popped out on the bottom of a recent clear cut, and short spur road that took us to Moores Flat Road. Back on the map! Even though we’d ridden bikes on Moores Flat Road I’d never really noticed this little road, maybe because it was on a downhill. Fun to fill in a piece of the map.

We continued up Moores Flat Road, back to Graniteville Road, and then did a bit more cross country to get off the “main” road – even though we hadn’t seen anyone else the entire time we’d been out – then were back on the originally planned route taking the “back way” to return to Eric’s cabin. Good times!

Thank you to Eric for being a good sport, joining in for a hike and sharing his beautiful neighborhood. 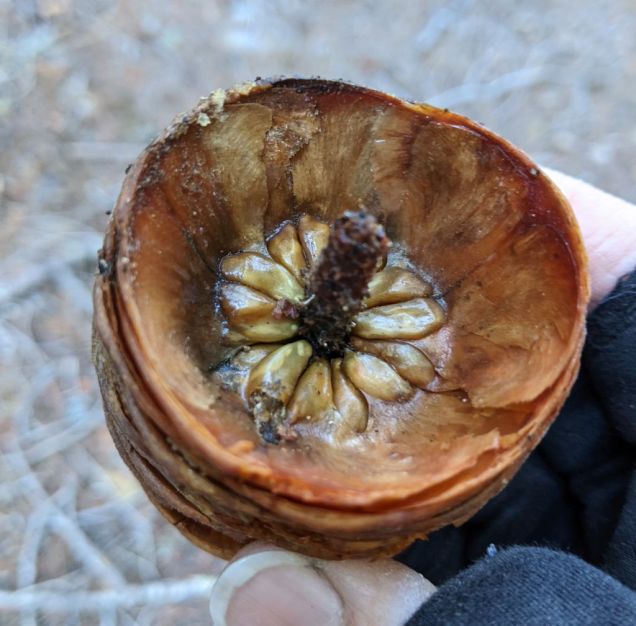 This entry was posted in five 0, hiking and tagged hiking. Bookmark the permalink.