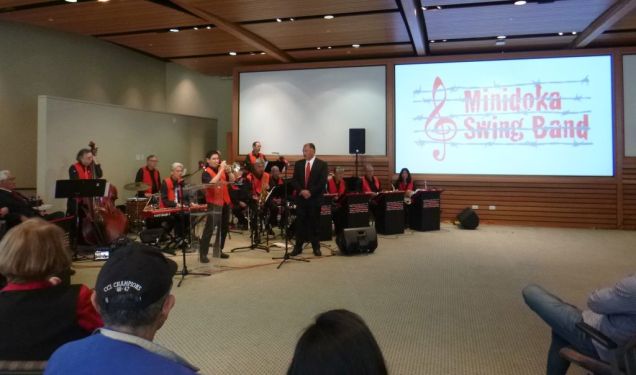 I got the opportunity to see and hear the Minidoka Swing Band at an event in San Francisco – back when those sorts of things (public events with groups of people) were still happening. It was a great show.

Minidoka was one of 10 concentration camps where Japanese Americans were incarcerated during World War II. The Portland, OR, based band was founded in 2007 to preserve and share the history of the camps, in particular the facet of the music, which was one of the means incarcerees used to preserve some sense of “normal life” or as a respite from the hardships of camp life. Three of the members were incarcerated, and many have parents, grandparents or other family who were incarcerated, so there is a strong sense of personal involvement.

In addition to the wonderful big band music from 17 players and 2 vocalists, there were video clips and some spoken commentary conveying information about the camps. Although it is a heavy topic, the music was the proverbial spoonful of sugar that makes the medicine go down. For some reason I’ve always had a soft spot for that big band dance music, and this definitely got my toes tapping! If you ever get the chance, check them out.