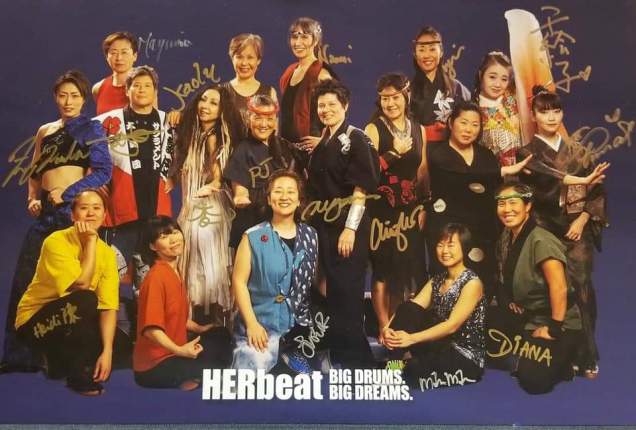 Although I’m lapsed from playing, I’m taiko-adjacent – friends still play, and I continue to be a fan and supporter. From the socials I heard about the HERbeat project, bringing together top women artists from North America and Japan. The artists would be spending two weeks together in a cultural exchange and residency, and performing in a concert at the Ordway Center for Performing Arts in St. Paul, MN. On February 29, 2020.

Minnesota? In February??? But, the line-up was amazing – any one of the performers would be a draw, but to have all of them, on one stage, in one night? Once in a lifetime. I decided to go, and talked my sister into joining me, making it our Sisters’ Weekend for the year.

we had some time before the concert started, so explored the theater and checked out the views 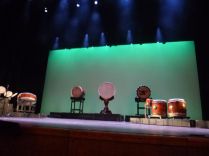 our seats were in the second row!

I wish it weren’t blurry, but oh well, I’m still including it

It was totally worth it, I’m so glad I went. Some of the performers I had seen before, some I had heard of but not seen, and others were completely new to me. So that was cool. The variety of pieces was fantastic – in addition to drums there was fue, shakuhachi, shamisen, singing and dancing. It was neat to see the variety of styles, and the contrasts and complements of the players’ different styles were well and thoughtfully used throughout the concert.

Beyond being a virtuosic display of skill and musicality, the event was super inspiring in that it was the realization of a “wouldn’t it be cool if …?” moment for Jennifer Weir, Megan Chao Smith and Tiffany Tamaribuchi. From idea, to dream, to reality. They made it happen, and shared it with all of us. What a gift.

It was fun to see people I knew in the audience! Masumi from Sonoma County Taiko!

Yurika from San Jose Taiko (one of the performers!)

Besides the concert there were other events during the residency, workshops and school shows. A full length documentary film is also being created. (Link on the page if you would like to donate.)