World Cup had started – decor in the hotel lobby 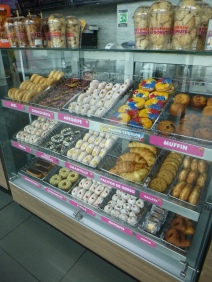 Go Colombia donuts (no, I did not get one)

I had no idea what time it was but if felt like the alarm for sure should have gone off. Maybe that’s what happens when you get enough sleep? When it was get up time we went downstairs for breakfast, and then across the street to the ATM for more dinero. Modern technology. Pretty amazing, and so convenient, to have a little piece of plastic that can get you access to your cash halfway around the world, but also faintly disturbing in some ways. Anyhoo.

On the way back to the hotel I was intrigued by a woman on the corner making foods – I think arepas and I’m not sure what all else. She indicated that if I was not buying something there was a charge for taking a picture. Yeah, it’s all a business, I suppose.

We checked out, leaving our not-needed-in-the-jungle luggage, and got a cab to the airport. We had aerosol cans of bug spray so had to check a bag, and then went the opposite direction from out gate at first, but we figured that out. At security there was no line, but for some reason I got wanded and they took my shoes and ran them through a scanner. Even with all that we had plenty of time before our flight. We got some snacks and cold beer, at first I think its 16000 but oops, its 60000. Guess airport prices are high everywhere.

Jon asked, “Do you like broccoli?” Seemed a little random, but yeah, I like broccoli. “Good. You’ll be looking at the top of it for 3 hours.” Hahaha. Right. (Although actually the flight was not that long.)

Although she had been several times, Angela was super excited to be going again. Her first visit was in 10th grade on a school trip, she said only about a third of class went, and that it was unusual for Colombians to go to the Amazon. Sounded like the thought was that if you were getting on a plane anyway you may as well go someplace else. She thinks it’s changing, but many Colombians feel that other places are better and go there for vacations. Guess that’s a common theme around the world too.

When we got on the plane I was surprised to be right in the front row! Eric had splurged on few extra centimeters of room for us. The pilot said we’d be going right, then left over the Amazon forest or jungle – I forget which word he used, and that it was 32 degrees and cloudy in Leticia. In fact, there was cloud cover most of the way, so not so much broccoli but rather cotton batting we were looking at the top of. About a half hour from Leticia we got below it, and there were puffy clouds, vegetation, rivers – I wasn’t in the window seat but I didn’t see much sign of man visible from the air. Eric thought we might be turning to stay in Colombian air space, but at one point the trace does show us over Brazil. We both forget to pay attention to when we cross the equator. 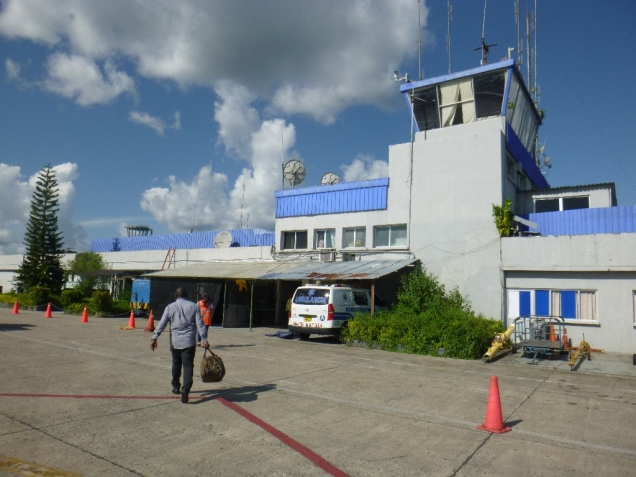 waiting at the baggage claim

It was warm when we got off plane – definitely warmer than anything we’d had yet on the trip, but somehow not as hot or full on humid as I was expecting. Not that I was disappointed about that. The press of people inside around the baggage claim was a tad oppressive, but we survived, collected our bag, paid the tourist tax, and went outside to get a taxi to our hotel.

We were following motor scooters, which would periodically swerve for no apparent reason. When our taxi slowed and also took evasive action I realized it was to avoid epic potholes. Way beyond Sonoma County size.

Again I hadn’t really looked at all the lodging options, figuring any of the ones Angela had suggested would be fine for a night. So I was a bit surprised when the taxi discharged us at what looked like a Disneyland safari ride. We entered the compound and tried to check in. Something with the check in took a while, I’m still not exactly sure what, but there was a restroom, and a gift shop where we got ice cream bars. The shop had AC, which felt pretty nice.

There was another couple also checking in, and the concierge(?) shepherded us all over to a seating area between the front desk and the restaurant. He brought some cocktail, which looked good and I was about to drink, but Eric noticed it had ice and remembered and reminded me that was an ixnay.

We got a WhatsApp message that the guide was at the Anaconda, where most of the folks were staying. I took our money over while Eric held down the fort at check-in. When I got back we were set with a room and … wristbands?! It was like Disneyland. Or going to the Amazon for people who want to go to the Amazon without going to The Amazon. All-inclusive, stay in the compound, eat at our restaurant, do our activities… Hmn. It wasn’t exclusively gringos anyway, and there did seem to be a lot of family groups, which I suppose I can see it making sense for. Anyhoo.

Angela had been telling us about the parrots, which sounded like something we needed to see, and so, after a little relaxing in our room we headed to the park. Unsure of what the beverage situation would be, we stopped in at a market. I wandered around a bit, as it always interests me to see markets in other places – the foods, and how they are arranged and displayed. We got some water, beer, and – hey we’re in the jungle – tropical fruit Gatorade!

yep, this is the bird park

We found the bird park – although it was still light out and the birds weren’t coming in yet, the deposits and their smell left no doubt we were in the right place. We walked around a bit waiting for the sunset. There were a bunch of vendors set up, with various trinkets and food stuffs. I was intrigued by what looked like a self-contained soft cart with a generator for power. There was a picturesque church across the street, and we found the rest of the gringo group on a corner with two shops. “Ice cream and beer! I arranged that, ” Jon declared.

The streams of motor scooters were something else to watch while waiting for the birds. There were various configurations of people and cargo, with a family of four being the most people we saw on one scooter. Well, assuming it was a family – man, woman, two children.

Then the sun fell in the west, and the parrots began to trickle in. As the dusk deepened, the trickle thickened to streams, then torrents of birds, wheeling in flocks and pouring out of the sky onto the trees in the park. Fluttering in and around the branches, sometimes settling, sometimes rising and circling. The visuals were amazing, and then there were the vocalizations – thousands of “hi, honey, I’m home!” Apparently they have figured out there are no predators in the city park, so they can roost and sleep in peace at night, then fly back to the jungle during the day.

Eventually we got our fill of watching the birds, and realized we were also done with people-ing for the day, so passed on the group dinner excursion and headed back to our hotel. On the walk back I saw a cat sleeping on the floor in a store and realized it was the first one I had seen.

Dinner was actually included with our stay, so that worked out all right. I had arroz chaufa, a Peruvian dish, and Eric had the BBQ chicken tamarind. Both were pretty tasty. There were two guitarists who played during the dinner.

As we headed to our room a BAT! dove over the pool, whee! and then there was dance music playing at the pool bar even though no one there. We looked around a bit to try to figure out how to turn it off, since it was right outside our room, but no luck. It was a little quieter when we were inside our room, but still not super conducive to getting to sleep. I channel surfed a bit while Eric showered – thinking maybe I’d find better music to cover the bar music, no dice, but I did see a bit of Mr. Bean and the Simpsons in Español. Before I showered I went out again, and that time found someone to turn the music off! Ah, blessed silence! And another full night of glorious sleep.