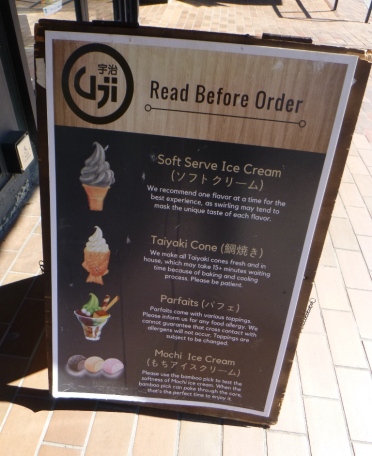 I can’t remember how I heard about the #madeforsocialmediadessertphenomenon of soft serve (er, cream?) in a fish cone, since I’ve somehow managed to resist being assimilated by The Instagrams, but I suppose some things even trickle down underneath my rock. And I like soft serve, and I like taiyaki, so why not? Anyway, I’d seen something about long lines and the fish cones selling out (oh or maybe that’s at the new(er) San Francisco location) – so I was a bit surprised when I first walked by the Berkeley location of Uji Time it seemed like it was closed. The almost next door construction site probably didn’t help with that. Then I did see a sign board out on the sidewalk, and the door opened when I pushed it, so yes… they were open. There’s also a matcha place in the same space, neither had a line. 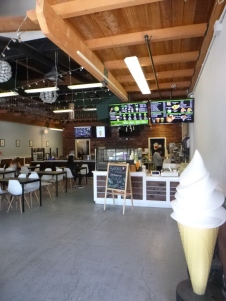 Who knows how long she’s worked there and how many times she’s had to explain the process, but the girl at the counter was very much over it. Indifferently unhelpful, which I suppose is a step up from rude – but basically RTFMing me. Which, they did have a menu and placard listing all the choices/steps, and I was able to figure it out myself, but it wasn’t like they were crazy busy and I was holding up the entire neighborhood. And, GETOFFMYLAWN!

Anyway, I went with the matcha (green tea) soft serve and red bean filling. The red bean is the traditional filling for taiyaki – or at least the one that I’m used to, so anything else seems kinda weird. There had been a warning on one of the signs that it might be 15 – 20 minute wait for the fish cone to cook and cool (see, I can read directions) but she came back with my treat almost immediately. OK then. The soft serve was a nice consistency and flavorful, and the taiyaki was tasty. It was a fun combination, but not one I feel the need to do again – well maybe if I happened to be right there and there was no line. Mostly it made me want to have more taiyaki, by itself without the soft serve!

This entry was posted in you Scream and tagged ice cream. Bookmark the permalink.