Who am I and what have I done with the myself who doesn’t go for The Next Big Thing? Who doesn’t Believe the Hype…

And I can’t even remember how I first heard about the Museum of Ice Cream. Probably the Facebook, but then I missed getting tickets when sales opened the first go-round. I didn’t actually realize I’d missed getting tickets until I got an e-mail from one of my doppelgängers with a link to an article saying a second round of tickets was going to be released. So, for the second round I made an event on my calendar so I’d be reminded.

When the BUY TICKETS button activated (OK, a couple of times before, but they said what they meant about the time) I clicked, and (first time for me) got put in a virtual queue. (I screen shotted it to share with you, but it’s not so readable, and I won’t subject you to the whole text cut and pasted in here. You’re welcome.) Wow! I wondered if there was that much demand, or if they had undersized servers, or what. Anyway, after not all THAT long – for sure not the up to an hour that they warned of – I got to the actually buying tickets part, and there seemed to be plenty of choices for days and times.

As they said they would (preferred method), 24 hours before my ticketed time I got a text with a link to my e-ticket to display on my smart(er than me) phone. Ah the miracles of modern technology…. Day of, we actually got to the Museum before the ticketed time, but the nice man policing the line said to go ahead. We were metered in – needing to show the ticket on my phone and photo ID with a matching name. Wow, they take this seriously!

The others in our group were a family with 3 boys and a group of 5 young women celebrating the birthday of one of them. The woman who had let us all in gave us an introduction – combination explanation and pep talk – and had us choose a “team name.” No one was busting out with anything, so she voluntold the kids as “team captains” and extracted a favorite flavor (Rocky Road) and favorite animal (which I can’t remember – and made a name from that. From the flavor I would have gone with Rocky Roadrunners, but no one asked me. 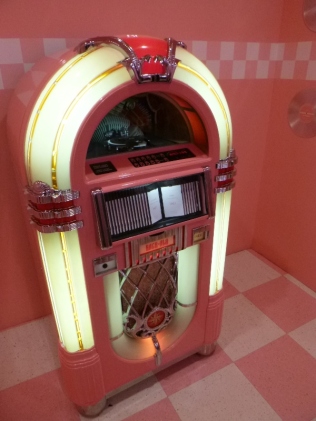 in the Diner themed room

some of these were pretty clever

Once she was done with her spiel we went downstairs to a room with ice cream factoids on one wall which we’d been instructed to read, and a liability waiver on the other, which hadn’t been mentioned. There was another audience participation (ugh, really?) with a staff member and then we were let past the barricade to the Ice Cream Vault – the building had been a bank at one point. Which, disappointingly, we did not actually get to go inside the Vault.

From there, it was, for the most part, proceed at your own pace, with the caveat that it’s a one way trip – no go backsies. Although, I didn’t actually test that. Each room had a name, and theme, with usually a bit of explanation. And yes, several of them had ice cream or other treats. The first was a Strawberry It’s-It, with a custom label with the MUSEUM OF ICE CREAM printed on it. Wonder how many you have to buy to get that! 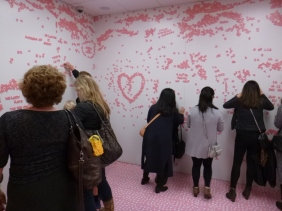 who wants to group by letters and alphabetize them all?

there was cherry flavored cotton candy

Hmn… let’s see… can’t remember now how many time slots there were per hour, and if they said how many tickets per time slot, but… I’m sure it’s conservative – say 50 people an hour, and an 8 hour day. Yikes. 400 It’s-It … yeah that would add up after a few months. Anyway.

Many of the exhibits did rely on repetition – that point where there’s so many of a thing that it becomes a bigger Thing – and so part of my brain was always wondering about the making of it all and so many questions – how many pink letter sets are there in the alphabet room? where does one get something like that? trying to imagine ordering supplies … I’d like however many hundreds? thousands? of pounds of plastic sprinkles… and how had they decided on what rooms and what order and hmn well I suppose this is someone’s Idea of Ice Cream.

So it wasn’t pure experience and enjoyment. There was the ongoing puzzlement, and wondering about the origin of some of the rooms in the what the heck were they thinking? kind of way and jeez I hope I don’t have nightmares about giant gummi bears and O.M.G. SO. MUCH. PINK. (which I am not a fan of.)

The other thing I had to wonder about is whether something like this would exist without social media. In some ways it seemed like that was the main point – to get The Picture(s) to post that you were there/had been there. One young woman – not from our original group but that we came across later – would very carefully arrange herself in each tableaux, with the cultivated expressions to capture the blend of whatever it is you’re supposed to convey in your online persona these days. It was both fascinating and disturbing to me. Well, I suppose we all have our filters for how we interact with and experience things. I felt like I might have been overly harsh in my thinking toward her when I saw the back of her jacket – ANTI SOCIAL SOCIAL CLUB.

Not to say I didn’t enjoy it, but part of me would have rather just been making and eating ice cream. What else do you need, really? Anyway, I’m glad I went with someone so I had some sort of reality check and can assure myself I didn’t just make it all up, particularly the weirder bits. It did have some entertaining aspects, but I’m not quite sure what I was supposed to get out of it – I know, I know – celebrating ice cream, right, no Big Message – but, yeah… can’t shake the feeling it’s just a big bamboozzle, smoke and mirrors, surface glass. Well maybe that’s the metaphor there – like dessert, empty calories. Only sweets seems like a great idea, but it doesn’t really nourish you. I hadn’t really known quite what to expect, but I guess that’s another point – sometimes you just have to go and find out. 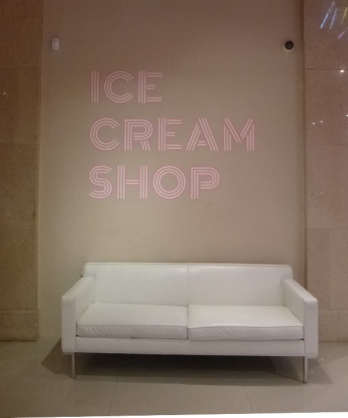 and of course, a shop. WHICH! only took credit cards. 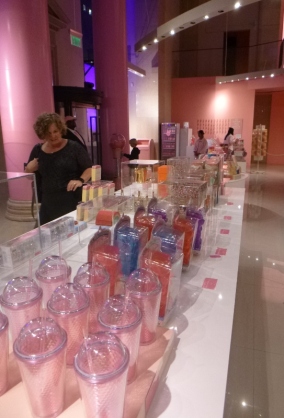 This entry was posted in museums, what the, you Scream and tagged ice cream, museums, San Francisco CA. Bookmark the permalink.