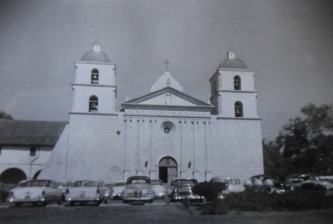 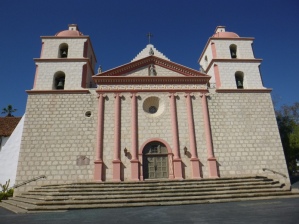 Which, I don’t know that there’s a New Mission Santa Barbara, but I suppose when you’ve been around since 1786 you can call yourself whatever you want. As these things go, it was established on the named saint’s day – December 4 – making it the tenth of the twenty-one California Missions. Santa Barbara is number thirteen for the ones I have visited.

there are lovely rose gardens below the Mission

The Mission Church is still an active parish and the Mission has a community of Franciscan friars. In addition to the buildings, there is a cemetery and mausoleum, and extensive gardens. Guided tours are offered, but we just went through the grounds and museum on our own. The self-guided version is easy to follow, and, like any good tourist attraction, you end up in the gift shop.

The Museum was small but well done, and had a nice selection of artifacts on display. I found the history video shown at the start a little hard to swallow though, with its repeated insistence on how the Mission was a blending of cultures and how friendly and equitable it all was between the Franciscans and the Native people. (my paraphrase)

I quite enjoyed the gardens though, and the GIANT old fig tree in the cemetery with its pitter pat of dropping figs. I later saw that there is also a La Huerta Historical Garden (tours requiring advance reservation) that includes plantings representative of the Mission era – Sonoran wheat, olives, grapes, citrus trees, bananas, sugar cane, pomegranates, peaches, guava and prickly pear. That sounds cool! Note to self if I ever get back to Santa Barbara. (Apparently there’s a carousel too, (in town somewhere, not at the Mission) which I didn’t know when we were there, although I only heard about it because it’s going to be leaving! But I digress.)

The front of the church, with the columns looks sorta fake, and, to me, doesn’t quite go with the rest of the outside of the buildings, and what I think of when I think of California Missions but the inside was quite lovely. Oh, maybe it was the pink color that put me off. Anyway, I suppose the architectural style seemed like a good idea at the time. It is a very pretty setting, and it’s always fun to try to imagine what it must have been like back in the day. 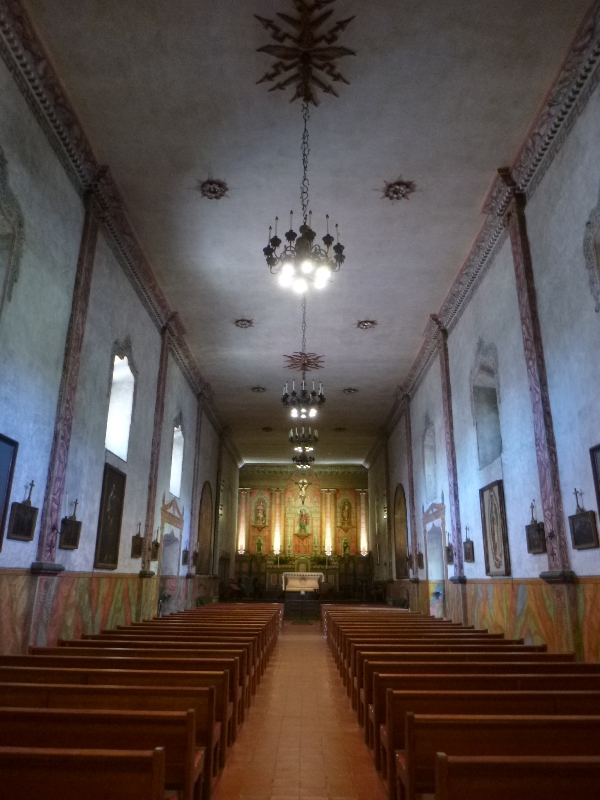 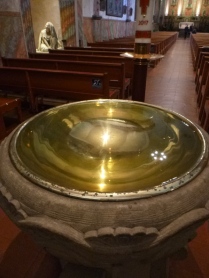 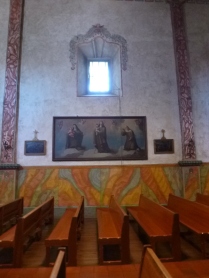 This entry was posted in history, just going to the mission and tagged California Missions, history, Santa Barbara CA. Bookmark the permalink.