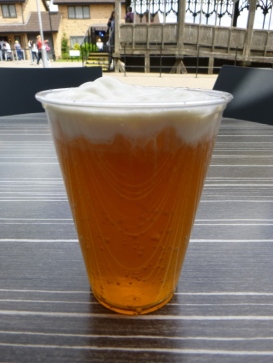 ixnay on commemorative mug. well I suppose I could have kept the cup.

and what’s up with that foam? I didn’t see them putting something separate on top, but it was disconcertingly persistent.

and yes, Butterbeer Ice Cream. Which, they actually had slightly different flavors, and I don’t think it was just because one was liquid and one was frozen solid. I couldn’t quite decide (or maybe it’s that I don’t remember now) which one I preferred. They were both butterscotchy, with maybe hints of other things – nothing super strong though – and mostly just way sweet. The softserve suffered a bit by recent comparison to Icelandic softserve, but was still pretty good. Trying them was mostly since they were there and I was there and then I could say I’d had them, but I wouldn’t put it on the Must Do List.

This entry was posted in drinks, travel, you Scream and tagged drinks, England, ice cream, travel. Bookmark the permalink.