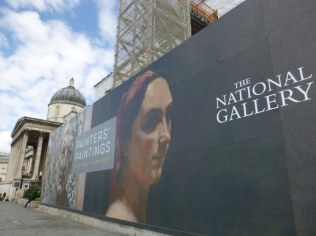 In a word (or two): solo day. alltheArt.

I actually started out the day with an excursion to the market, which is always a fun thing to do in another country – seeing what the food choices are and how they are presented. On the way back I crossed paths with my aunt, she was surprised to hear someone call to her. I don’t know anyone in London!

We collected the others, and although we had different destinations, we started out on the Underground together. Then we got off at the same station, but whereas I exited, they transferred trains. Once above ground, I found my way to the National Gallery, and took in the special exhibit Painters’ Paintings, which I had seen a sign for when we’d passed by on our overview day and had the thought IMUSTSEETHAT!!!

That had been a good thought, if I do say so myself. It was a wonderful exhibit, exploring art owned by artists, which was a fascinating unifying theme that managed to encompass a wide variety of works. A large bronze by Matisse was quite the revelation. Alas no photography allowed.

Then, since I was there, I took a spin through the rest of the Museum. Which, I know, doesn’t really do it justice, there is SO. MUCH. TO. SEE. You could spend weeks there. I didn’t have any particular agenda, but just did my best to pass through all the rooms, stopping to look closer at whatever grabbed my attention. It always fascinates me to see the people with the audio guides or a book hightailing it from Point A to B to whatever they are being told they are “supposed” to see. Besides the art on the walls the building itself is a marvelous experience. 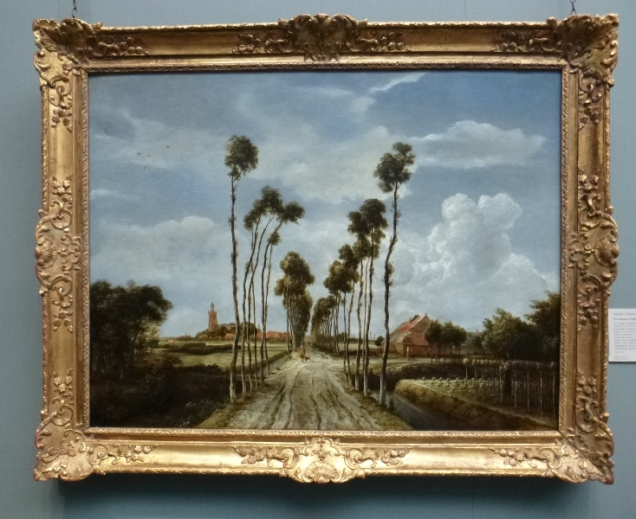 Eventually I needed to come up for air, and headed outside, where I ate my snacks and watched the world go by. Next was a bit of a walk in search of gelato. I went by one place that had a sign declaring it “Best Gelato in the World” but there was a line (I know, what would I expect for the Best in the World?) and I was sorta looking for a particular one I’d found on the intarwebs. Which I did find and enjoy. 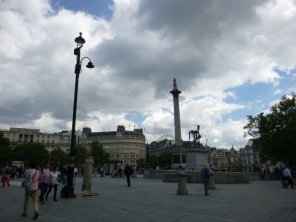 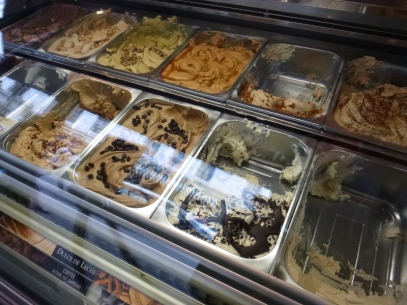 So, I dove back into theArts, having a go at the National Portrait Gallery. They had a jewel box of an exhibit of Lucian Freud’s work, including some exquisite sketches, and really, I could have been done with that… but, I was there, and who knows when I’d be back, so I sucked it up to check out the rest of the Gallery. Rough job, but someone’s got to do it.

Which I’m really glad I did. Figurative works are not necessarily my first choice for subject matter, so I wouldn’t have had the Portrait Gallery that high on my list of Places to Go, but (perhaps the low expectations thing?) it was actually very cool and I really enjoyed it. Focusing on a particular genre gave a window on art history – various styles overall and the particularities of portraying people – as well as history history – almost all the people had some sort of significance, and you would learn a lot if you had the time to read all the description cards. There was another special exhibit featuring the Brontes, it was neat to see Charlotte Bronte’s handwriting and the little books she and her brother made when they were children.

Finally I was beyond full and had to call it a day. OK, maybe some food, I just went up the street, as it seemed like there ought to be something, but of course that thing when you’re looking you don’t see anything but oh yeah there were bookshops… I just peeked in. OK, went in a few of the places. And just looked around. Pretty much. Still no food though. 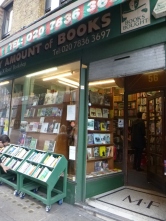 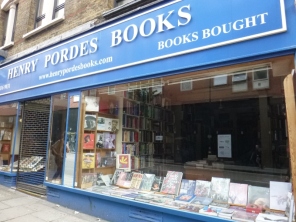 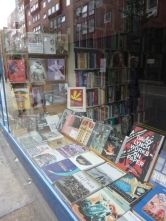 So I just went back to Chalk Farm, then walked down the street from the station, again not seeing anything. Well, I had been thinking noodles, but whereas every other day I’d seen noodle places, today not so much. wanh wah. I also kept thinking oh I should have something can’t/don’t have in the States.

I ended up at the Camden Market, which – GAH! – was totally overwhelming and I had to flee. Back near the flat I looked at the menu at the Asian restaurant but nothing jumped out plus I heard there would be a wait so I just went back to the Italian place and tried one of the other things that had sounded good. Which it was, although then when I was done I sat for while wondering if I was supposed to ask for the bill? Eventually that got sorted and I made it back to the flat for the evening’s Bottle Apostle selection: