Our Aunt declared we Must Go to the British Museum, and even though I’d been before on previous trips to London, I wasn’t going to argue, as one could make multiple visits and still have more to see. Once we were there she didn’t have any particular imperatives about What to See, and left us to our own devices. I wasn’t feeling up to trying to coordinate with anyone else about where to go and advocated for Choose Your Own Adventure and headed off on my merry way. 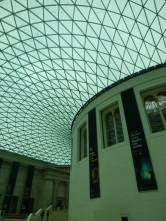 On the Museum map both Medieval Europe and the Middle East caught my eye but OH! I saw there was a Prints and Drawings room and had to go up there first. I was still dressed for outside and ugh it was almost unpleasantly warm in some places along the was. There was a small exhibit of early drawings by Frank Auerbach, including (plate-o-shrimp) a couple of Primrose Hill. The larger special exhibit area featured a display of Francis Towne’s watercolo(u)rs of Rome. They were delicate washes of evocative color with and pen and ink detail lines. A couple of the pieces had the subtle greygreenblues that reminded me of the colors of Iceland. 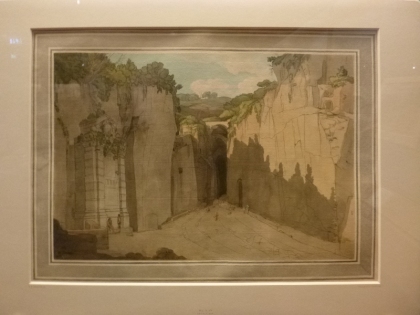 Then, since I was there and had to wend my way down and out from the upper floor, I figured I may as well hit some of the “must dos” – the Easter Island dude, the Rosetta Stone, which was not particularly visually interesting as an object (and not very photogenic – hard to capture a dark object behind glass) but obviously conceptually and historically significant and cool to see in person. I cut short Egypt as it was crowded, mostly with tour groups of Asians. In one of the Middle Eastern galleries I had an art history moment – the four-legged figures on a gate had their front feet depicted on both the side and the front – not quite a full transition to true 3D representation. And yes, the marbles from the Parthenon are still there, in London. 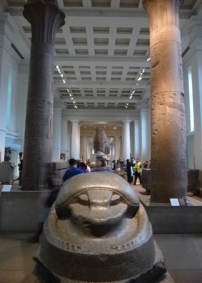 Which, in some of the galleries, it was difficult not to think snarky thoughts about “the spoils of Empire” while looking at the displays. How did the collectors justify bringing things to England? Or did they even think about it. On the other hand, with irreplaceable art and historical objects being destroyed by wars and religious fundamentalism in their countries of origin, I suppose an argument could be made that it’s a good thing there are examples being preserved in other parts of the world. And people who may never get the opportunity to travel to those areas get to see the objects, and having such a wide-ranging collection allows for exhibits such as Living and Dying, which explores different approaches to the human pursuit of well-being. This gallery also included the modern installation Cradle to Grave. I’m not sure I would have gone without the prompt from my Aunt, but I’m glad I did – definitely saw a great variety of beautiful, fascinating and thought-provoking objects.

1 Response to The British Museum