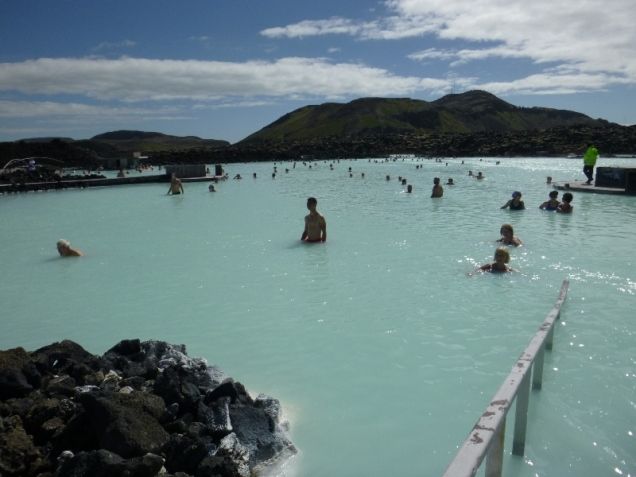 No pool this morning, since it was BLUE LAGOON DAY! So I slept in a little. Something had gotten blown over in the kitchen during the night, which had woken me, but I’d gotten back to sleep. After some breakfast my sister and I went out for a walk, I went a little bit away from town then back to hit a grocery store, she continued toward the golf course.

At the store I stocked up on Icelandic candy, which I knew would be fine, and, although I wasn’t sure what shape it would be in by the time we got back to the States, I went ahead and got some bread. All the breads were plastic wrapped but many of them still felt warm, as if they had come from the bakers that morning! Alas, no sea salt for the collection. From the store I went back up to the apartment then we were off to the Blue Lagoon.

From the Blue Lagoon the host parents took us on a tour around the Reykjanes peninsula – they had printed out some educational material about the things we were going to be seeing, and, although I think all of us had already read it, brought it along for further perusal. In a word, GEOLOGY!

From the Blue Lagoon we went south, past the fishing village of Grindavík, one of the few harbors on the south coast. As we continued out the peninsula we passed some fish farming facilities, an antenna field and a golf course. It’s an area for summer houses for “people who like the ocean and wind.” 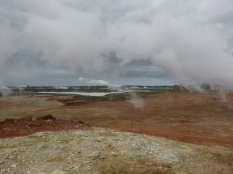 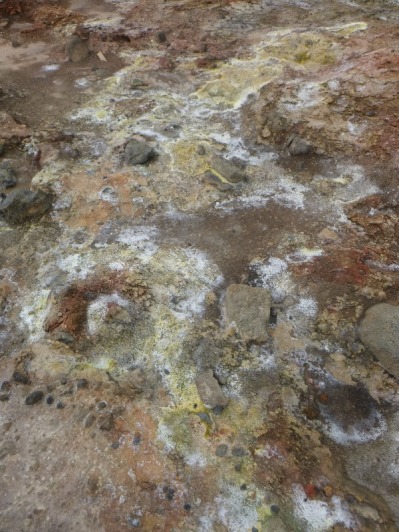 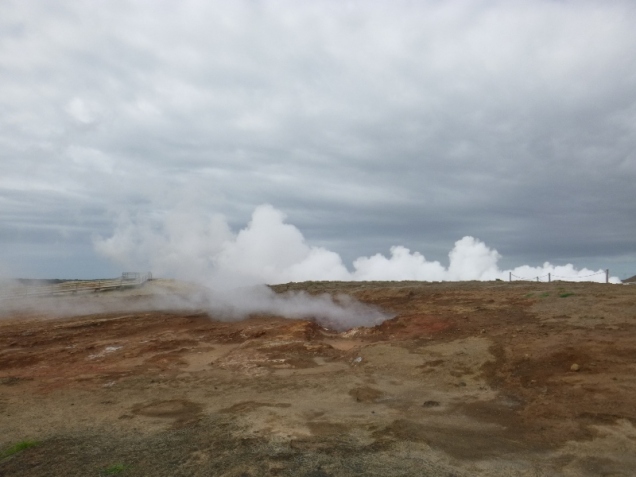 Our first stop was at the hot spring Gunnuhver, which steamed away amidst multi-colored rock deposits. It was tucked away down a narrow lane, an incongruous full-size tour bus was navigating its way out as we arrived. Faðir commented on how active (“hot”) the peninsula is, and that there might be an eruption at any time.

From there we went on to the bird cliffs on the south-western edge of the peninsula (and country, for that matter.) There was a statue of a Great Auk, and we could see out to the island of Eldey, which is now a protected bird reserve. On our way back to the main road some folks were walking back to their car from the lighthouse and getting divebombed by the arctic terns. Apparently those birds are very territorial! 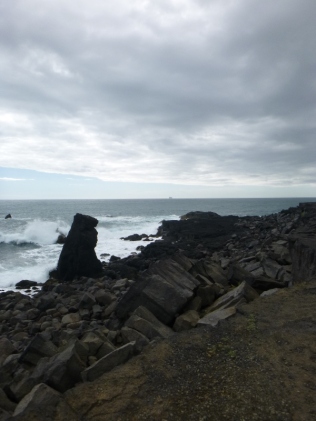 We also passed a geothermal power plant, then stopped at the Bridge Between Continents. Móðir had gotten a call, and, even though it kinda seemed like we were in the middle of no where, there didn’t seem to be any issue with signal fade. I had noticed the same thing when she’d had a call out in the country near the summer house. Oddly I don’t recollect seeing any big cell towers though. Hmn. Magic? 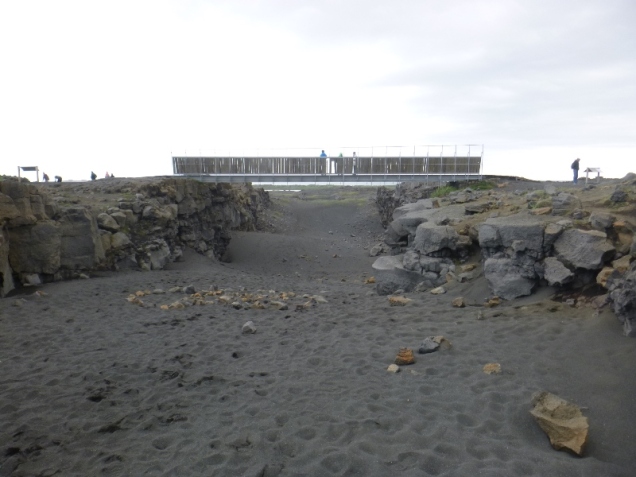 Faðir took a little detour to drive us around a small village, then it was back on the main road past Keflavík. There had been a military base there – first British, then American. He said when they were kids he and his friends used to climb the fence and go check things out. One time they’d gone to the movie theater, and he’d had popcorn for the first time. I couldn’t tell if the popcorn had been a good thing or not. As we went by the exit for the airport he joked that if we’d brought our things they could have just dropped us off (for our early flight the next day.)

As we headed back toward Hafnarfjörður, Móðir made the proposal that we should have dessert first, which (twist our arms) we all agreed to, so we went in to town for soft serve! Then is was back to the apartment, we did actually have some real food dinner, and then packed up for the next leg of our adventure!