Sweet Moses, please do not use “pumpkin pie filling” 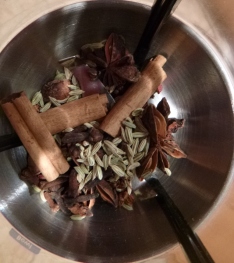 Maybe a little early for the pumpkin, but hey, I had a can kicking around, so why not. It really is a good flavor, even if it does get overdone at certain time of year. Or is it actually a flavor? Color/texture + spice delivery vehicle, which, in this case there were – as the name says – five! Szechuan peppercorns, (Which weren’t in the pepper section at the spice shop, what’s up with that?! They did have them, but I actually had to talk to someone to find them. urk.) cinnamon stick, cloves, fennel seed and star anise. 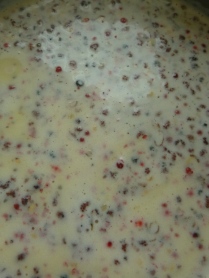 And, another Humphrey Slocombe recipe, Salt and Pepper. AKA Salt-N-Pepa … push it real good… Which apparently sometimes people will ask what’s in it. What do you even say? Well, there actually were three kinds of peppercorns – Szechuan, pink and black. I was kinda surprised the salt was just kosher salt, not something fancy. This was one of those recipes that I’d been intrigued by, but somehow never got to making, oh I think due to lack of pink peppercorns. So it was fun to finally do it. It turned out to be one of those – in another way – flavors – one of those ones I couldn’t quite make up my mind if I liked it or not. Definitely not a straight up traditional sweet flavor, but not an immediate disqualification. Perhaps it needs to be paired with something.

This entry was posted in I Scream and tagged Humphry Slocombe Ice Cream Book, ice cream. Bookmark the permalink.