So, if you can believe what you read, Iceland is quite the party place, and Icelanders drink to get drunk. (Which, well, what else are you going to do during the part of the year when the sun never comes up?) The other thing I saw several places was mention of the expense of alcoholic beverages, and the thing to do – advice to tourists anyway – if you were planning to drink much was to stock up at the airport duty-free. I can’t say one way or the other about the drinking to get drunk, since I didn’t go out on the town, but I did see people hitting the duty-free in the airport.

Also, I found out later – not sure if this has anything to do with the current rates of consumption (oh or how Iceland compares with other Scandinavian countries) – that Iceland had a long history of prohibition, with a full ban going into effect in 1915. For various reasons various drinks were allowed back over the years, but full strength beer wasn’t legalised until 1989. Go figure.

Brennivín is uniquely Icelandic. The legal beginnings of this distinctive spirit were in 1935, when prohibition was partially lifted on the island. A black label was chosen to be unappealing and limit demand. However, it had the opposite effect. Today the Brennivín label is a symbol for Iceland’s signature drink – and of Iceland itself.

Brennivín is billed as Iceland’s signature distilled beverage, which made me curious about it. It is made from fermented grain or potato mash and flavored with caraway. Some call it Icelandic schnapps, but it does not have any added sugar, so by American definitions (specifically the US Alcohol and Tobacco Trade Tax Bureau), it’s not actually schnapps or a liqueur, but an aquavit. Brennivín means “burned wine” and comes from the same root as brandy. It was introduced in 1935, when prohibition on strong liquor was lifted, with the black label – originally with a skull on it as a warning against consumption. Due to this it was sometimes called “svarti dauði” (black death.) When I asked my sister if she had tried it she did the hard exhale/breathing fire sound and face.

So maybe one of those Things that just comes out every now and again and hey let’s get the tourists to drink it! I didn’t actually try it while we were there, but picked some up in the duty-free at the airport on the way out. Which, in retrospect, a mini-bar bottle probably would have been more than enough. 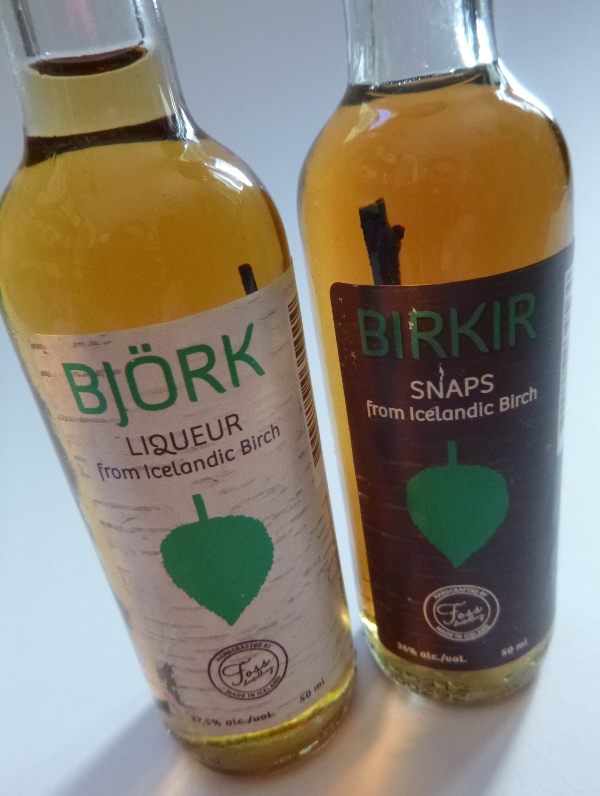 The two mini-bar bottles were total impulse buys – the twigs in the bottles caught my eye – after finding out that fir tips are edible I’m intrigued with the idea of ingesting trees. Both are infused with Icelandic birch – handpicked in spring, according to the maker – the liqueur is additionally finished with Icelandic birch syrup.

This entry was posted in drinks, travel and tagged drinks, Iceland, travel. Bookmark the permalink.