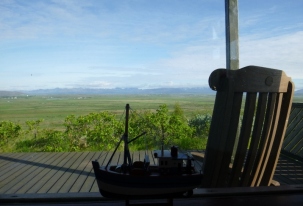 view out a front window

I slept in, again enjoying the having my own space. The usual breakfast selections were expanded with the newtome smoked cod roe in a tube (like a toothpaste tube!) which was eaten on top of hardboiled egg on bread. Hmn. Salty. Not sure I need to do that again, but when in Iceland… Then the dried fish came out, which I don’t think is necessarily a breakfast thing, but while we were trying new things what the heck. And yeah, it’s like it sounds. Dried. Fish. Apparently the thing to do is put butter on it. Yes, it’s better with butter. (What isn’t?) 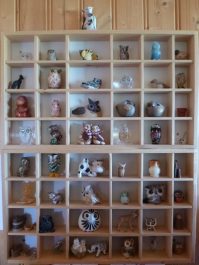 another of Móðir’s beautiful quilts

more quilt yumminess, and a needlepoint her Móðir had done

I went for a little walk, then we packed up and drove back to the city. Hung out at the apartment then went over to the host sister’s for dinner. Before eating we all went on a walk around the neighborhood. They took us up to the Cliff, which I had accidentally found on my way to town the other day. It’s one of the three outdoor Things the area is known for – the other is a mountain which I’m forgetting the name of now, and then a park. I also found out that the giant eye bolts are for anchoring the big Christmas tree that gets put up for the holidays. We went by the older boys’ school on the way there, and the youngest’s preschool on the way back. The youngest seemed quite taken with WCN, walking with him and holding his hand. Super cute.

Dinner was grilled lamb chops! I know – lamb again – Móðir had seemed a little apologetic they hadn’t coordinated better but none of us were complaining. There were also giant potatoes (imported – the local ones are the small ones) and roasted vegetables. Super yum. PLUS vanilla ice cream with strawberries and warm chocolate sauce for dessert. Quite the feast. Mmmm, getting hungry thinking about it!

The middle boy brought out his table soccer game – WCN lost, then I did, even with getting spotted a couple of points. He was feeling pretty cocky, but then his Dad took a turn and schooled him. Ah well, you can’t win them all.

As we returned to the host parents’ the clouds had organized themselves to the point that it was raining a bit. It still wasn’t dark, but the overcast did make it seem a bit more reasonable to be going to bed. Another lovely day!