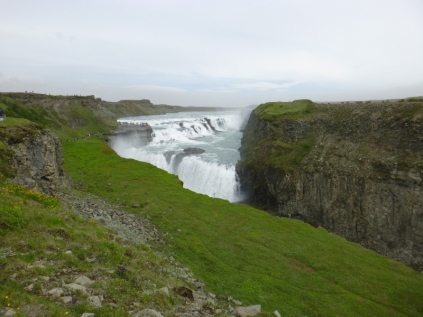 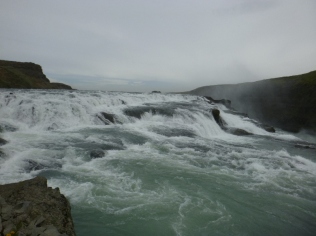 After Geysir – or I suppose it could be before, but we went after – the circuit continues to Gullfoss, the Golden Falls. I might have seen a picture before we went, but I really wasn’t prepared for the magnificence of experiencing it in person. So. Much. Water. The sheer amount and force of it, the spray (it was overcast while we were there, so we missed rainbows, but still impressive) and the sound are quite overwhelming. We parked at the lower lot, and walked along the trail with the rest of the tourons, the full height of the second drop only reveals itself as you get a ways along. The water somehow all channels into a narrow canyon below and flows out of sight. At the drop-off it was a mild scramble to get about, with a token cable around the edge. There was a stairway up to the second level, which also had a car park and visitor center. So you can also park there and walk down. The host parents drove up and met us. The wind, which had been present at the falls level was ridiculously intense up above. My sister and nephew took in a bit of the view and went to the car, I leaned into it (glad I wasn’t on a bike) and walked over to look over the falls and the river above it. On my way back there were some kids along the boardwalk jumping as if to launch – I’m going to fly! 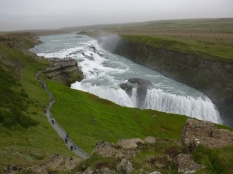 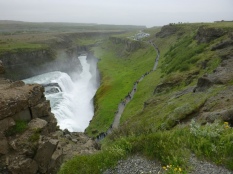 river above the falls 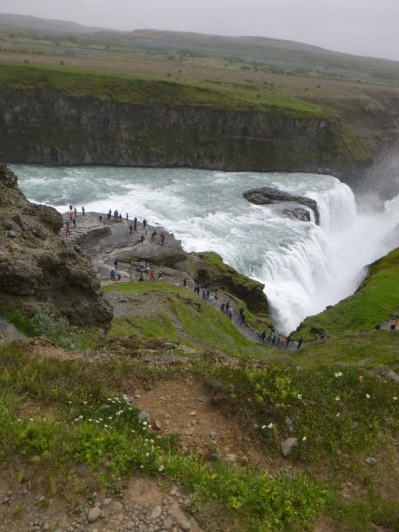 The falls also have a dramatic back story. In the early 1900s the area was leased to foreign investors who planned to dam the river for a hydroelectric project. Sigriður Tómasdóttir, the daughter of the farmer who had made the lease agreement, sought to have it overturned, walking the distance to Reykjavík barefooted several times to pursue her case. She also threatened to throw herself in the falls if any construction were to start. Fortunately she did not have to do this, although her court case was not successful the lease was terminated due to lack of payment. Due to her efforts she has become known as Iceland’s first environmentalist. In 1940 her adopted son acquired the falls, then later sold it to the Icelandic government. It was made into a nature reserve in 1979.

This entry was posted in travel and tagged Iceland, travel. Bookmark the permalink.