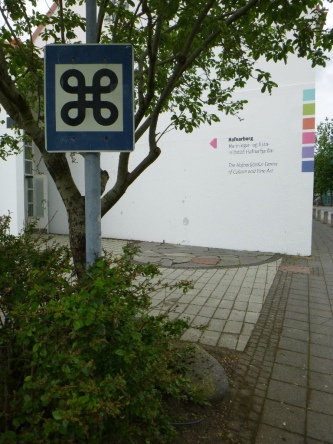 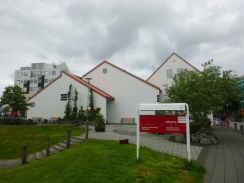 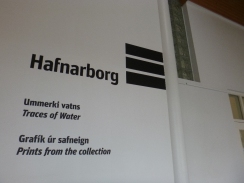 Faðir had pointed out Hafnarborg, the city’s art center when he’d driven us around Hafnarfjördur on our first day there. It had briefly flickered on my radar, then I happened to see in a tourist paper or on the website or somewhere that the exhibit on was Ummerki vatns (Traces of Water) – a group show of six artists that all use with some form of water in their works. OK, not just the fact that I work for a water district, but I was intrigued to see what the show would consist of. 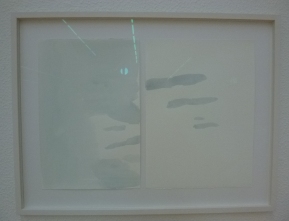 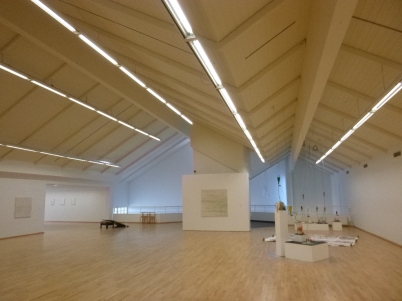 Turning out to be quite a variety. Included were (perhaps obviously) watercolors – both as single media and used with others, a video, an interactive piece that invited you to spray water on a mirror to make rainbows, and an automated dispensary creating a piece in real-time. Gah! Double-dipping on the worklikestuffs there. Hey, I’m on vacation. Really.

The exhibit was upstairs, in a large open room. Other than the mirror and the automated piece, everything was hung on the walls, so there was lots of space – it felt like you could have a meeting or party or dance. In addition to the exhibit spaces there was a library/study area, classrooms, a shop and cafe. It felt like quite a bit went on there and that it was a great community gathering place and resource.

AND! Before I even got upstairs to the main show, there was an exhibit of Prints from the collection in the smaller gallery space on the first floor. It looks like this is an ongoing, rotating exhibit of works, so I lucked out that it happened to be prints while I was there! Super awesome unexpected bonus, quite lovely works. I was glad that I fit in a visit, especially since it was right there it would have been a shame to miss such great exhibits.

This entry was posted in art, museums, travel and tagged art, Iceland, museums. Bookmark the permalink.