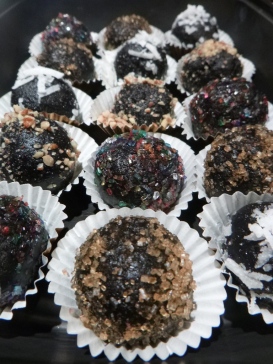 I keep saying I’m going to unsubscribe from the Smitten Kitchen e-mails. Every time I get one, I want to stop whatever else I’m doing and make whatever it is. Especially the sweet treats. Well, this time I had a party as an excuse and a place to take them, although I’d already decided on something to make, but how could I not do these??? Although the jury is still out on the advisability of eating something with both fudgy and balls in the title. Of course, the one time I don’t print out the recipe, the website is down when I go to make the recipe. Turned out I have the Melissa Clark book the recipe was adapted from! What are the odds?! Anyway, I ended up doing a reprise for a friend and another gathering, after I found black cocoa, and had a few left over. Also had some fudge ripple that I hadn’t used in the S’mores Ice Cream, and this was starting to sound like something that should lead to something cold and creamy. Which! David has a Bourbon and Spiced Pecan variation of Vanilla. Easy to change the riff – still add the bourbon, but then go with the fudgy balls (actually small chunks, and ended up crumbling some) and the fudge ripple instead of the pecans. Wasn’t super-duper fudgy, since I was just using up leftovers, but the bourbon adder in the ice cream was really quite nice. I might have to try that Spiced Pecan variation!

This entry was posted in drinks, I Scream and tagged David Lebovitz, ice cream, Smitten Kitchen. Bookmark the permalink.