Letters to Myself: The Calligraphic First Day Covers of Alan A. Blackman

Pretty sure I’d heard of this close to when it opened, then was reminded about it by Jennie’s great post, but of course didn’t make it until just now as it’s about to close. (The original date was through today, October 11, but there was a note at the exhibit that it’s being held over until the 13th. You might want to double-check on that if you’re planning to go after today though.) Anyway, I’m glad I made it, as it’s an excellent combination of two wonderful things: calligraphy and stamps! 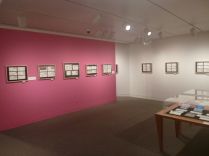 Alan A. Blackman, the artist, wrote this post about his work, and there’s also a video that plays in the exhibit where he discusses his childhood stamp collecting and later thoughts to share this interest with his son, and how that developed into the envelopes on display. He’s a balding fellow, his remaining fringe of hair dyed purple, and, in the video, seems mildly bemused by it all.

These are the first two envelopes. I had no idea at the time that they were the beginning of an endeavor that would last for thirty-six years.

He started in 1968, when stamps were 6 cents, and there was about one new issue a month. Things have changed a bit since then, both price wise and the volume of new stamps. The first were basic lettering, but as time when by he was inspired by the content of the stamps. He also found that he liked the look of a block of stamps, rather than just a single one, after needing to add more postage to send to his son who was then living in England. 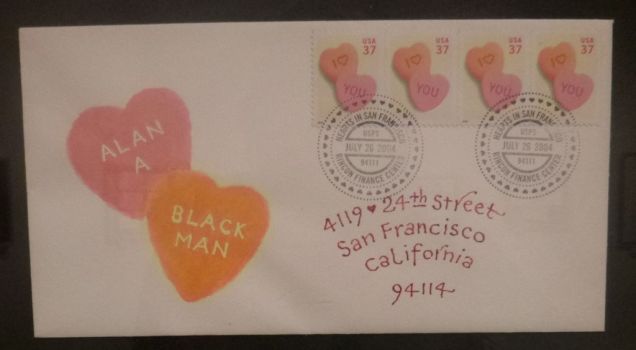 This is the final envelope. By that date my son Stephen had become a professional traveling freelance videographer, leaving behind his family home and address. There was no point in continuing. There was also a note that the exhibition is dedicated to the memory of his son, 1957-2012.

He admits being rather sheepish about sharing what he had done with other calligraphers, since it seemed so personal, but found it got a positive response. There seems to be some sort of law …the more personal the work is, the more people are interested in it. But I don’t know if that’s universally true.

just going to the Mission! 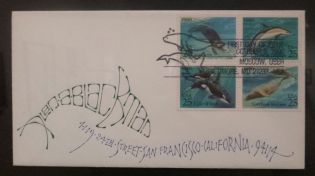 The personal, and personality of it is indeed very captivating. You can sense the love and care that went in to every piece, and the adventure of sending away for the stamps and getting the completed envelope back in the mail. Very wonderful and inspiring! 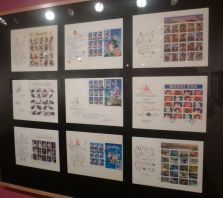 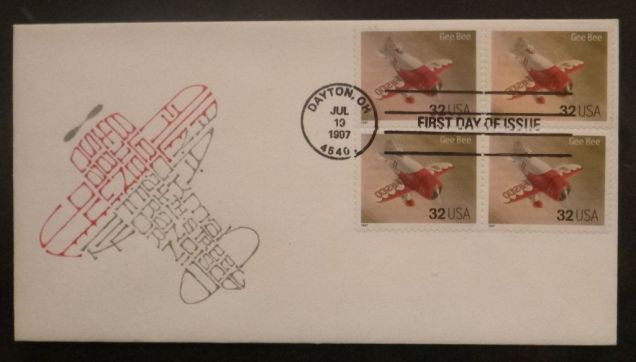