This way to Pie!

Petaluma is just far enough away (or maybe it’s the traffic) that it doesn’t seem particularly convenient to get there, but then not so far that it seems like it’s a destination and worth planning to go there. Or maybe it’s too many other things going on. Whatever, despite its many charms I don’t seem to get there very often. 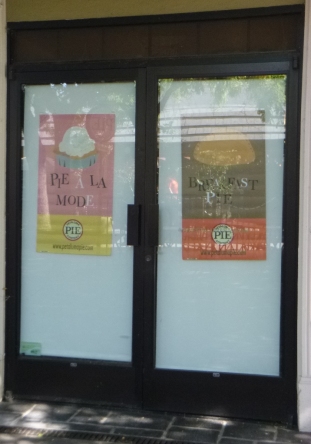 Which, as far as the Petaluma Pie Company is concerned, or shall I say as far as my waistline is concerned, it’s a good thing I don’t go there more often. Because DANG! they make a tasty pie. AND they do both savory and sweet.

I actually did try to go there once before, and it was a not open day. Yeah, someone in the Research Department got fired over that. Talk about expectation bringing disappointment! Well, at least no pie. Anyway, this time I double checked that they would be open. Yes! And I also went to the Degas exhibit, so definite twofer jackpot!

The shop is a cute space tucked into a little square just off the main drag. There is indoor and outdoor seating. Fun wall decorations, Petaluma Pie merchandise, and, of course, the reason we’re all here, PIE! The menu is somewhat variable, based on what’s in season and what’s already been eaten that day.

Again tempted by Strawberry-Rhubarb, but went with Peach-Blueberry for my sweet pie. And for the savory had Pork Rhubarb. Which. was. AWESOME! The rhubarb was not super obvious, but I’m sure it would have been a different pie without it. I recommend it even to someone undecided about rhubarb. Maybe not to someone who hates it, but…

Sign says: Sit here and eat pie! I can do that!!

The Peach-Blueberry was also ridiculously yummy. Everything else looked and sounded good, and I would definitely go again to try something else the next time I find myself in Petaluma.

This entry was posted in baking and tagged baking, Petaluma CA. Bookmark the permalink.