November 17, 2015: Up at 6:15 after a fairly sound sleep. Watch the sunrise out the window for a little then notice a cloud of smoke a few blocks away. Fire? There doesn’t seem to be any commotion about it. Then it moves. On to the Avenida, and then off to the east. Oh. Maybe that’s why there’s (surprisingly) no bugs here. I close the window until the cloud dissipates.

Walk downstairs and off to the Plaza de la Revolución. Through the neighborhood and up the Paseo, which is another major street with a park like median. Watching to make sure I don’t get run over, and a little distracted by the Jose Martí monument, I step off a curb and into a puddle. Ew. Don’t think about what I might have stepped in. (I do wash my feet and shoes when I get back.)

At the Martí memorial I just want to walk up and look around, see the view over the plaza. There’s a chain across the road. There isn’t one on the sidewalk, but when I start up a woman comes out of the guard hut and blows her whistle at me. I give (what I think is) the International Question Look, she replies Cerrado! and makes an X with her arms, very emphatically.

Closed?! How can it be closed? It’s outside. I just want to go up and look around and see the view. My paltry Spanish doesn’t feel up to the task of conveying this to her, so I just continue past. The other side isn’t guarded, but I’ve been warned… I look in the guidebook when get back to the casa. There is a museum, which has open hours that we were outside of. Oh and you can go up in the tower! Dang to miss that. (Another of my Things.)

I continue around the plaza, there’s a park with some cool modern art sculptures, a library (that I don’t have time to go in, boo), other officialish looking buildings.

Here’s Cienfuegos! I just enjoy from afar. There are guards that make it seem like you have to have some business to get close with.

Che I think it would be cool to go up underneath and take some pictures from that angle. It doesn’t seem as off limits as the Cienfuegos – or maybe I’m imagining that since I want the pictures, but there are guards, and as soon as one of my feet is in the air and aimed toward the building rather than continuing straight on the sidewalk I get whistled at and motioned to stay back. Well so much for that idea. Try a bit of zoom but it isn’t quite the same.

I go back a different way on another major street. There are a couple of interchanges that don’t particularly seem to have pedestrians in mind, but I make it safely and then hey here’s the Avenida! I follow it up past Señor Gomez and the other Presidentes and down to the casa. 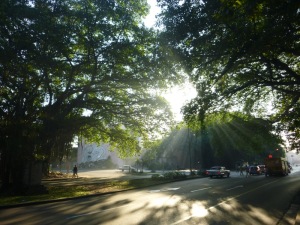 Breakfast. Then the taxi ride (vintage car, with modern stereo. The display says SUAVE, and please don’t go is playing) and walk to the third floor studio for the morning’s lesson. Salsa – dancing! With Siete Potencias, who we had previous drumming sessions with. It’s great fun, and feels good to move. Well there’s a whole nother thing I hadn’t thought about trying to get out and do. As always, so many things to do and so little time!

We have a little bit of time before lunch, so a few of us walk over to the dragon gate, which turns out to be by the locomotives, and then we have lunch in Chinatown.

The afternoon activity is a drumming lesson with Rumba Morena, and we meet Diunis at a church. As we’re waiting we watch some school kids playing and having relay races. A man asks if we’re here for the marathon. 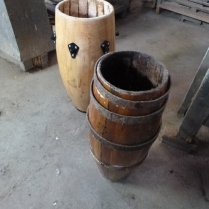 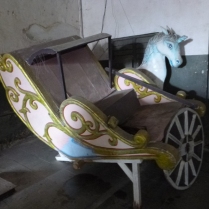 From the church yard she takes us through the neighborhood over to their studio. It’s a fantastical warehouse space, that is also either for building or repairing instruments, I’m not quite sure which. There’s various parts of things around, many of which seem like they’ve found their final resting place.

Fascinating how universal some things are – Diunis teaches us patterns by having us say and clap them – reminds me of kuchi shoga in taiko. She also focuses on the basic hits, and talks about the importance of practicing them, and getting each type very clean and clear.

We do one of the rhythms we’d done with Siete Potencias, which they had done starting with a small chunk and gradually adding on. Diunis starts with an open version of the whole pattern, and adds in the ‘left out’ hits as we go to build up to the entire thing. She talks about how teaching is an art, how you have to understand how your students learn differently. She’s awesome.

It’s twilight when we come out, and boys are playing soccer bare foot in the alley. We head toward a larger street to catch taxis, seeing a few games of dominoes along the way. The street we end up on is by the theater where we saw the jazz show. No Manifestation Wagon today though.

Back to the casa, and then to a Mediterranean/Seafood place for dinner. Amazing, tasty food. Laine and I go out in search of music. We walk along the Malecon, fishermen are out, and using blown up condoms as balloons to float their lines out further. Who knew. It’s a pleasant evening, but we don’t have any luck finding music. Still, another amazing day!

and… lack of emissions controls does make for some fine sunsets