We had gone by the Plaza de la Revolución on our way from the airport to our casa on the first night in Cuba, and seen the monuments to Cienfuegos, Che and Marti illuminated by electric light. I was curious to see it during the day time, and made it the destination of one of my morning walks. I went up one of the other major avenues, and tried to not get too distracted by other things along the way. 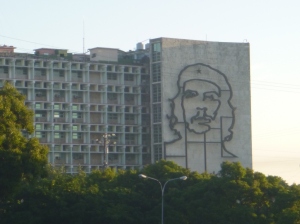 that dude on all the t-shirts

The plaza is 11 acres, and fills with upwards of a million people for political rallies and observances. Fortunately there were no teeming throngs when I visited, I’m not big on crowds. It was pretty mind-boggling to try to imagine the space with wall to wall people. 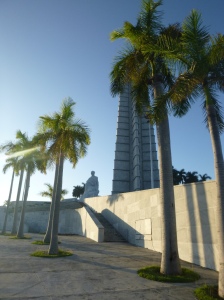 I could see over to the Cienfuegos and Che portraits, but was on the Marti memorial side of the Plaza at first. The memorial is on a bit of a rise, and I wanted to walk up to look at it closer and to see the view. There was a driveway with a sidewalk going to the top. There was a guard kiosk and a chain across the driveway, but nothing blocking the sidewalk so I started up. A guard came out of the kiosk and made an ‘X’ with her arms, saying “NO.” I did have my camera out and was taking pictures, but I’d seen pictures of the monument, so I didn’t think that was the problem, and when I held the camera up with a questioning look she was fine with that. “Cerrado,” she said, very emphatically.

The Plaza from the Marti Memorial

View of the Plaza with the Capitol Dome in the distance.

Closed. Hmpf. Um, it’s a statue and monument, outside. How can it be closed? I just want to walk up, see it closer and look at the view. I didn’t feel my language skills would be able to convey that, and the woman didn’t seem particularly open to discussion anyway, so I didn’t pursue it. The other side didn’t have a chain or guard hut, but the deterrent had been placed, and I was starting to feel a little pressed for time to get back for breakfast.

When I got back I looked at my guidebook, and there is a museum at the Marti memorial, which is what the guard must have been referring to as being closed. You can also go up in the tower. When it’s open. Oh well, maybe next time.

Continuing around the plaza, I had a couple of adventures in crossing the street, and then came to the Ministry of Communications, which features Cienfuegos. This seemed much more officially DON’T COME IN HERE, so I just stayed on the sidewalk.

View back across the Plaza to Marti

Che was up next, on the Ministry of the Interior. This one didn’t seem quite as no access, or maybe it was that I was really thinking it would be cool to get right underneath it and take some shots looking up, but as soon as my foot left the ground as if to approach off the sidewalk the guard made a forbidding motion. Alrighty then. I’ll just take my pictures from here. 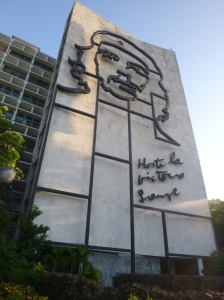