Obama Give me five! On a Havana apartment building entrance.

In the Departure area – after security – at José Martí International Airport 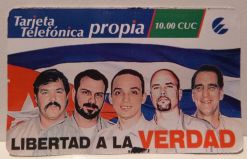 One of two displays I saw in Viñales, they were at either end of the main street.

No, not a musical group, and, not to be confused with the Cuba Five (who knew?), but (another gap in my knowledge base) five Cuban intelligence agents who were captured, tried, convicted and jailed in the US. Take your pick at to whether they are nefarious spies, heroes, or other. They were gathering information on anti-Cuban government activity in the US, which, depending on where you stand, is a good thing or a bad thing. Preventing attacks on Cuba and/or Castro was allegedly the focus, not the US government, and some feel the Five were treated unnecessarily harshly in light of that fact. A complicated situation, and many passionate opinions as to what would be best for Cuba. Anyway, there were definitely references to them in Cuba. Now (December 2014) the last three have been released.