First glow of color on the horizon, get up, slip on some clothes and out the door. I take the stairs down, there’s a book shelf on floor 6.

Out on Avenida de los Presidentes and right toward the Malecón and the ocean. There are other people out and about, some on their way to work or whatever their day’s doings are, some out exercising. There’s a sports complex sort of thing right next to the Malecón.

The morning light is beautiful, as are the shapes and colors of the buildings. Funny how even the most ordinary things seem picturesque in another country.

Monument to Calixto Garcia. Um, yes my Latin American History would be a bit lacking. Some fisherman are out. I see a woman on a Bianchi, and later two men on town/cruiser bikes. A dog here and there, and once in a while a cat.

Walk along the Malecón for a while, look out at the ocean. Toward Florida. It’s there somewhere, not too far away. There’s a park with fanciful mosaics. It’s fenced and the gate is closed. (I walk by other days too, but never see it open or anyone inside.)

There’s an official looking building, with military or police sentries. They don’t say anything, but I cross the street.

Turn back inland, take a different way back. Seeing more people, both that it’s later and I’m in a neighborhood. Pass a few schools, the children in uniforms.

Large shiny new Ford trucks puzzle me a bit. Where did those come from? Isn’t there an embargo?

A few of the others are up, but nothing seems to have happened with breakfast. We do get some coffee, and then, eventually, breakfast – beautiful fruit salad, yummy warm bread and nice scrambled eggs. Revueltos. It sounds nicer in Spanish.

The others that are staying on the 14th floor come down, we get a map overview*, and then head out for our day. The electricity is out. Oh, that means no elevator. Alrighty then.

*There IS ice cream – in fact an ice cream park – (yes, more later) I’d actually read about it in one of the books I’d gotten last-minute – state subsidized (almost free but long line, and free for kids on their birthday – interesting what choices are made as to what to support), although there is apparently a separate area for tourists where you pay with CUCs.

There’s a bit of a ceremony going on at one of the statues in the median of the Avenida. A trumpet player, and a few others in military dress uniform. We walk through the neighborhood, and past UNEAC – Union de Escritores y Artistas de Cuba – where we’re going to see music in the evening, more people out and about now. Open air market on a corner, bakery cart on another. A man with a large bag full of what look like meringues.

Continue through the University and into an older section of town. Laura had warned us it would be a bit rough, clarifying that she didn’t mean rough as in violent but physically deteriorated. The day was starting to warm up, so it was nice to reach our first destination, Callejón de Hamel.

Where, apparently, bathtubs go to be reincarnated. Murals, sculpture, so much to look at! We have a guide, Elias, who talks about Santería, (I don’t do Santería – he sings a bit – you know the song by Sublime) and the alley, and I’m not sure what all. I came and went between following along and wandering and looking on my own. His shirt says Robert Nesta Marley and has a picture of, wait, that’s Bob Marley. THE Bob Marley. Oh duh, I guess Bob is short for Robert. Just never thought of him that way. Didn’t know his middle name either. 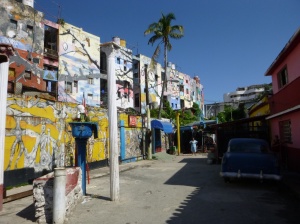 He’s smoking a cigar. Elias, that is. I get the impression that Santería is a way of approaching life. We solve problems with faith. and Like attracts like. 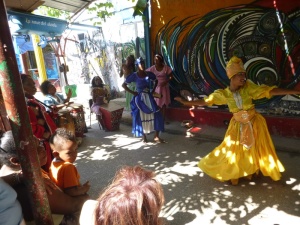 Rumba Morena, one of the groups we are going to have lessons with, performs. Drumming and dancing. Beautiful.

Look around more. Salvador González Escalona’s gallery is open. Nothing grabs me but a few people do buy things. Obviously we’re tourists, people want to know from where. Estados Unidos. Even here I get that look.

More walking, the midday sun warm on the pavement of the city streets. All the sights and sounds to take in. Oh! A bike rider in full cycling regalia. Later, a print shop. I wish I had the time (and the Spanish) to talk with them. 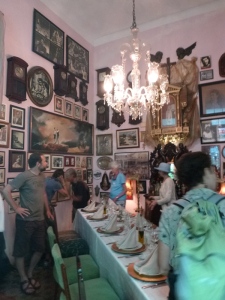 Lunch is at San Cristobal, a private home that doubles as a restaurant. The owner collects (and displays) clocks, pictures, expensive bottles (that he doesn’t drink.) Laura’s ordered some hors d’oeuvres, I’m not sure what everything is, but it’s tasty. For main, the common choice of fish or chicken. I go with the fish. After lunch we get a tour, and hear about the actors and famous people who have been there. 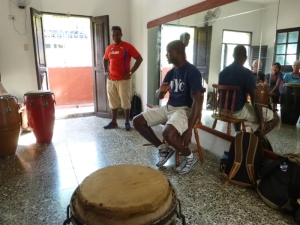 Across the street for our first drumming lesson with Siete Potencias. Again, it seems like someone’s house, but there’s a rehearsal/studio space on the third floor, up flights of narrow steep stairs.

Basic strokes – some of the people on the trip aren’t drummers or musicians particularly, but everyone is a good sport – which is always good and mostly f-ing A I’m drumming in CUBA! Who would have thought? I feel like I can understand some of what the teacher is saying (in Spanish) but maybe it’s the combination of it being about drumming and that some of it he’s demonstrating. Anyway, it’s all super fun.

On the way downstairs one of the women shows us a tile mural of some of the Santería orishas on a hidden wall. It’s beautiful, but doesn’t feel right to ask to take a picture of it.

There’s the option to take a taxi back, but many of us end up walking. A few blocks to the Malecón, then along the sea to the Avenida. Again, so much to look at. Bike repair in the street, an old car being restored, dramatical clouds. Ah, the Hotel Nacional. Starting to get orientated, that is, a sense of how things are located relative to one another.

Some people go for a drink at the Nacional, a few of us go back to the casa and then out to UNEAC. Where, it turns out, they are having technical difficulties, and so no music. Also no cold beer, so we head over to a small chill neighborhood bar on 13th, and then to dinner at El Idilio (the Idyll), also near the casa.

Lots of yummy sounding choices, I go with the assorted meats. Everyone is getting their plates with food and a nice sauce garnish flair thing, the waiter puts a plate with just the flair in front of me. Uh, OK. Turns out all the meat comes in a crock thing. Which makes it look like far more than it is, and I get teased about. And I still have (make) room for dessert. There is ice cream on the menu, but I go for the tres leches cake. Yum! The dessert eaters hang out and chat at the restaurant, then make our way back and relax at the casa. This is amazing!