I have mixed feelings about this post. Part of what made my first visit to the Main Branch of the San Francisco Public Library so amazing was that I had no idea what it was going to be like. So there was a huge unexpected WOW! factor which I may spoiling for others. On the other hand, it’s too awesome to not share, and if it gets people to go that might not otherwise, that would be cool. And there may be people who won’t be able to go, so this will be an opportunity for a virtual visit.

The other thing is that after I visited I found out that the new library was quite controversial. The new library actually ended up with less shelf space and the collection was thinned (some say gutted) with the culled volumes put in the landfill. There were claims the thinning was done with little oversight.

Anyway, I was just going to check out the BookWorks exhibit, and sure, it was on the sixth floor, but Library. That, at least in my head, conjures certain visuals. Books, lots of books, of course. Not dark, per se, but not so much natural light. Not literally dusty, but a sense of time, I guess you could say. That not quite smell of years of paper. Mazes of stacks to wander in. I hate to use the word dowdy or frumpy, perhaps utilitarian.

So, like I said, I wasn’t really in it for the library. I parked in a garage several blocks away and walked over. I was just starting to wonder how much further and if perhaps I should consult my map or (gasp) ask someone, when I looked across the street I was about to cross and BOOM! there it was. Oh, shiny! OK.

Well this is certainly fancier than I was expecting, crossed my mind as I entered. I wasn’t quite sure where I was going, but it seemed as if I’d need to go toward the center to go upstairs, and so I proceeded. Whoa, very modern architecture, open spaces, views over shelves of books and work stations below and to levels above.

OK, a sign for the exhibit, and I’ll have to continue on to the elevators. I figured I’d take the elevator up (sixth floor is the top level), check out the exhibit and then walk my way back down.

And THEN! The central atrium! Wow wow WOW! Six stories open to each floor and topped with an amazing skylight. I stood and gawked for a while, and tried to capture it in electrons. (Virtual film) Used the restroom, the signs about not doing laundry, etc. etc. a reminder that we’re in a big city.

As planned, I took the elevator up to the sixth floor and took in the BookWorks exhibit. Which was pretty darn amazing, but wait, there’s more! The Library’s Book Art and Special Collections room, which has a press! and San Francisco History Center. I’m sure there’s all sorts of treasures in there. I didn’t have anything in particular to look up or look at, but just wandered around in awe for a bit. 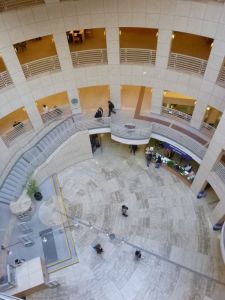 Then sculpture, with great afternoon light, and the author’s wall (formally known as Constellation), and the cards from the card catalog and other random small display cases with art or informative displays tucked in here and there. A bit of sensory overload after a while, but I eventually made it around the floors and back down to where I’d come in.

And in the midst of All That, people using the computers, finding books, reading, writing, doing all those library things. As if oblivious to how amazing their surroundings. Part of me wanted to grab them and shake them LOOK AT THIS!!! (and I did see other people taking pictures, particularly in the atrium area) but then part of me was glad that it was, after all that, still just a library.