panorama from the start

One of the e-mails I received after registering for the Tule Lake Pilgrimage asked if I wanted to go on the optional hike up Castle Rock. Having never been on the Pilgrimage or to Tule Lake before, I wasn’t sure what this was, so I asked, getting the following response:

Castle Rock is the iconic landmark at Tule Lake.

Before Segregation the incarcerees were able to leave the camp, have day outings and climb Castle Rock.

After Segregation the prisoners were not allowed to leave the barbed wire confines of the Concentration Camp.

Castle Rock became a symbol of the most immediate kind of freedom that the prisoners were denied. 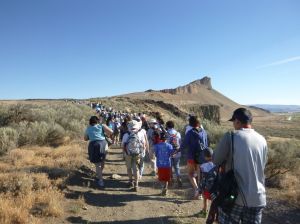 Wow. Yes, sign me up, please! Besides the historical significance, it would be good to get outside for some physical activity. Although it did mean getting up earlier and missing hot breakfast. 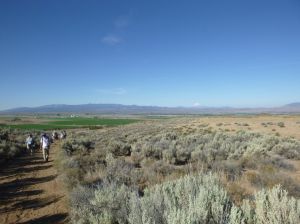 Mount Shasta was a constant companion in the distance.

There were somewhere between 100 and 150 folks who chose to participate, even after the hike leader’s stern warnings of what we were getting ourselves into. It was mostly a walk up a dirt road, with the end being a scramble up a loose hillside with no particular path to the rock outcroppings at the top. Once past the loose bits it was free form clamber around on the rocks if you wanted to. 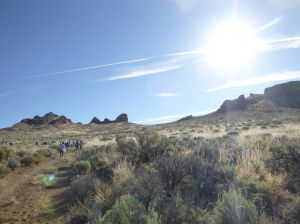 Part of the land we crossed is private property, and even the part which is public land is of the type that is not generally open for visiting. Or that may be due to the need to cross private property, I’m not exactly sure. Anyway, we had special dispensation for our visit. Although there was evidence that other people go up there, and I did not see any fences on the way up. 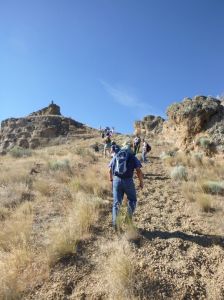 A ranger joined us on our bus ride over from OIT, she said her name was Hanukkah. Which I thought was a bit odd, but it was kinda early, sure whatever. Later I saw her name tag, her name was actually Hanako. She told us that Castle Rock is locally known as The Peninsula, from when Tule Lake was actually a lake, and the landform was indeed a peninsula. 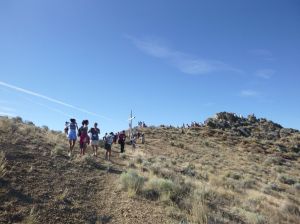 I was in no rush, and didn’t feel like walking in a big crowd. The numerous feet were stirring up some of the dust you hear about in most accounts of life at Tule Lake. I chatted a bit with someone I’d met the previous day, then he forged ahead. 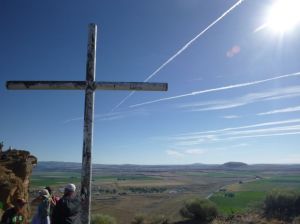 I overheard a woman say, “This wasn’t the same way we came up, but it was a lot easier when I was in fifth grade!” It turns out she had been in the group that had brought a cross up on Easter Sunday in 1943. Here she was again. Not her first pilgrimage, but this year was the first time her three sons had come. Wow! We walked together for a bit and I got to hear some of her stories.

panorama from the top

It was pretty amazing to see so many people all over at the top. The views were really wonderful as well. To one side where the camp proper had been, and to the other side where crops to feed the inmates had been grown. Mt. Shasta glimmering in the distance. 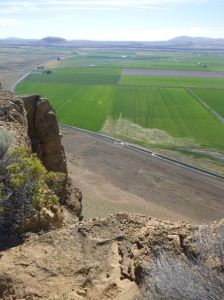 view of irrigated agriculture below

A very powerful and special confluence of people and place.