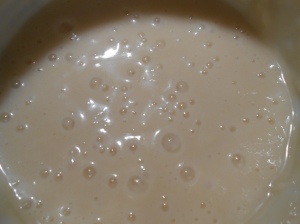 When people ask if I have a pet sometimes I’ll ask if a starter counts.

You do have to feed it.

I also joke about living under a rock, as I don’t hear about a lot of pop culture or fad things. Or at least am among the last to know. 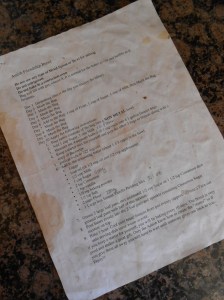 So a few years ago there was the Amish Friendship Bread thing that people were talking about like I was supposed to know what it was. Uh, OK, like a chain letter but a starter and sweet bread recipe. Sweet bread, not sweetbreads. What a difference a space and an s can make!

Anyway, I eventually did get one from a friend. The instant pudding in the recipe didn’t seem particularly Amish, nor did the amount of sugar, but who knows.

I of course had to follow the recipe the first time. It seemed like there was an excess of cinnamon sugar for coating the loaves, and using it to dust the pans as the recipe said didn’t work out the greatest. So I made a few adjustments. Then started doing different flavor variations. I’m up to #86.

If you get a starter/batter you can either just use it and make the bread once, or you can follow the directions and feed it and keep it going. Even if you don’t have the starter/batter, you can still make the bread, I forgot once and it still came out. It was a bit denser, not quite as high or moist, but not the complete disaster I’d thought it might be when about halfway through baking I realized I’d forgotten to put the starter/batter in.

If you do want to keep the starter/batter going, some things I’ve found:
1. I keep it in 32 oz. container. Easier to deal with than floppy baggie.
2. Does not have to be exactly Day 6 for feed and Day 10 to bake. Feed ends up to be anywhere from 6 to 10, then another 4 to 6 until I bake. Seems to end up to be about twice a month, sometimes only once and it’s still fine. There have been a couple of times where I knew I wasn’t going to get to baking for a while so I just fed and kept the minimum amount as if I had.
3. I have mine on a diet, so I don’t have to worry about generating a bunch of children that I have to find new homes for. Instead of 1 cup sugar/1 cup flour/1 cup milk on the Day “6” and Day “10” I use 1/3 or 1/2 cup of each, depending on how it’s looking, mostly the smaller amount, unless it seems like it’s a little scant to have enough to use and to keep the one for myself.
4. Grease and flour the pan rather than coating with cinnamon sugar. The cinnamon sugar thing did not work out so well for me
5. Lately I have been using 9×13 pan rather than 2 loaf pans. 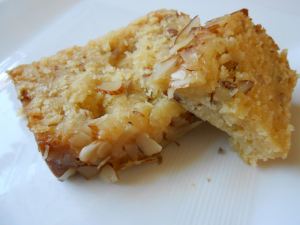 Of the variations, numbers 3-5 can be more or less, depending on your taste and if you are using some of each or not, and of course they affect the consistency and baking time.

I have given a few starters away, but not sure that they’ve really gone anywhere. It would still be cool to see some family trees for some of these things. If you asked me when I got it I don’t think I would have said that it would last as long as it has. I’m thinking maybe I’ll just get to 100 and retire it, but we shall see how things go.