Obon is a remembrance and celebration of your ancestors. In Japan people will travel to their hometowns and visit family gravesites. They clean up the sites and make offerings.

There is also the associated festival and dancing. The Enmanji Temple in Sebastopol has Obon Odori the third Saturday of July. There is dance practice the week before, but most of the dances you can follow along and pick up on the spot. The announcer will say the name of the song, the direction (dances are done in a big oval) and whether there is any accessory used (fan, towel, kachi-kachi).

Most dancers dress in yukata, the summer kimono, making a quite lovely scene. Also, for the past few years there has been live music by Ensohza for some of the numbers, which is really awesome. Not that the old tapes don’t have a certain ambiance, but the live music is fantastic.

It’s a charming and wonderful event, and you see many of the same faces every year. A very sweet multi-generational community event and nice to visit with folks that maybe you haven’t seen since the last one.

The moon was out. (Upper right corner – more obvious in person.)

Then there’s the Imagawayaki. (This is really what it’s all about.) Waffle-ish delight filled with sweet red bean paste.

Waiting in line. Waiting, waiting. It smelled SO good. But the yumminess takes as long as it takes to cook, and there were a bunch of large pre-orders they were trying to fill. They are so good all warm and fresh, I’m sometimes tempted to get a box, but I don’t think they’d be quite the same later. Although I’ve never tried re-warming them. Maybe I don’t want to know that they’d still be good. There’s something special about the time and place as well and just having them there at the temple. 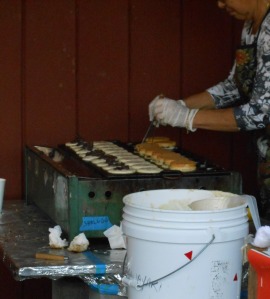 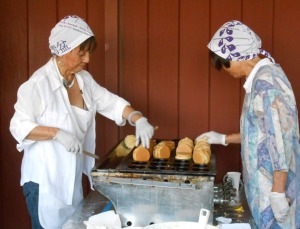 OH NO! I was almost to the front of the (looooooooooooong) line and one of the aunties said they didn’t think there was going to be enough after they filled the pre-orders. Really?! I stayed in line just in case, and whew, they weren’t out. They did limit it to two per person, which I briefly debated, but all I really needed was one, so may as well share the opportunity for enjoyment.