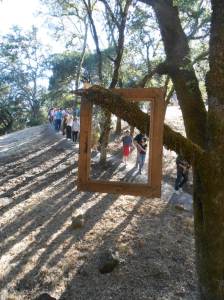 We were sternly warned about departure time and if you missed the bus you were out of luck, so of course we were early. Turns out there are actually (at least) two Park and Rides in Geyserville, go figure. But we were in plenty of time to sort that out, and got a parking spot in the shade, which was nice as the day was pretty toasty. 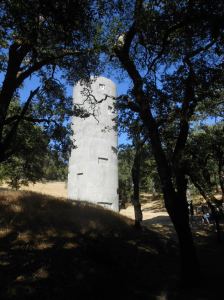 The throngs assembled and eventually (past the YOU WILL BE LEFT BEHIND time) we boarded the buses. School buses. I tried to remember the last time I’d been on one of those. However long it’s been they don’t seem to have changed much. Sweet detail – no AC. Fortunately the ride was only about 10 minutes.

It was a bit of a surprise that Oliver Ranch is so close to downtown Geyserville. Also that the entrance is quite low-key. Hard to tell from where I was in the bus, but I don’t think there was any sort of sign indicating that it was, in fact Oliver Ranch, and, while the entrance was gated, it was a basic metal farm gate. For some reason I was expecting further out in the country, and some sort of stonework or pillars or other sort of grand entrance. Oops wrong stereotype?

The driveway up the hill required a bit of navigation by the bus driver but we made it up to a clearing where the bus stopped. A bit of unclarity, but yes it was where we were to get off. More milling around, and a bit of a talk from an unassuming fellow in shorts and a t-shirt. Who, it turns out, is the owner!

Then we got word that the performers were ready, so we trooped off down the hill. Around a bend and TOWER! there it was. Not far from where the busses parked, but we couldn’t see it from there. Lovely setting amongst the oaks, nestled into the hillside. I couldn’t help wondering about the construction, trying to imagine how they did it, the forms, how they got the mixer trucks in, how many yards of concrete it was.

For the first part of the show the Cielo Vertical Arts performers were arrayed on the outside of the Tower. There was one musician with a variety of instruments, and to his accompaniment the performers danced on the Tower. Moving, lowering themselves, lifting off the surface individually and in pairs, suspended, flying. There were also fascinating shadow patterns cast on the surface of the tower.

Then it was time to enter the tower. The entryway requires some sort of maneuver to navigate, most of us seemed to settle on sitting on the threshold and swinging our legs over and in. It was much cooler inside, and we ascended one of the staircases. There are two, and the performers were arrayed on the other. Once the audience was settled the performance continued. More music and singing, with the great acoustics of being inside the tower. Dancing on the steps, sliding down the banisters, lowering down the center of the tower. A reflecting pool at the bottom and open to the sky above.

Looking down the outside

The performances are specific to the structure, and it is definitely a presence and plays a role in the work. The two staircases blur the line between performers and audience, and the variety of vantage points means a potentially quite different show for everyone. Quite wonderful and fascinating. 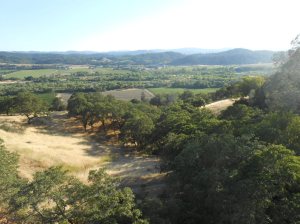 View from the top

After the performance finished we continued up our staircase, took in the amazing view and descended on the other staircase. Trooped back up the hill and onto the waiting buses for the ride back to Geyserville.

A truly magical happening. Even without a performance the Tower is really cool. I had to wonder since the owners can access it any time how often they actually do. In addition to the Tower, there are other site specific art works on the ranch. We had glimpses of a few, but I’ll have to go back to really see them.

Another of the art works – stairs running across the road and hillside.